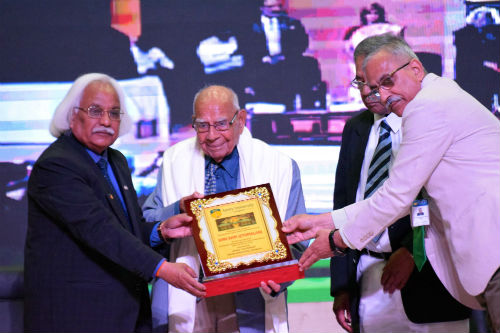 Guragon: The 3rd National Moot Court Competition (9th March to 11th March) organized by Amity Law School, was inaugurated today at Amity university Gurugram campus by Shri Ram Jethmalani, Hon’ble Member of Parliament (Rajya Sabha), Padma Shri Dr T K Vishwanathan, Mrs Ruby Yadav, Mrs West Asia 2015, Ms Sushma Sahu, Member, National Commission for Women and Prof. (Dr.) P B Sharma, President, Association of Indian Universities and Vice Chancellor, Amity University Gurugram.
The moot court has chosen the theme of “Marital Rape, Child Marriage and Domestic Violence.” The event will seek to integrate the academic potential, legal insight and art of advocacy amongst the law students of 40 Teams, each comprising of 03 students from prestigious Law Schools/Universities of the country wherein their mooting and drafting abilities and argumentative skills would be put to test. These 40 Teams represent the best in the country, some of these being, Eight National Law Universities, Govt Law College Mumbai, ILS Pune, Delhi University, Aligarh Muslim University, Symbiosis Pune and Hyderabad and Three Amity Law Schools. The prizes amounting three lakhs will be distributed to the winners adjudged First and Second positions in the competition.
In his inaugural address Shri Ram Jethmalani said that, “I feel great and young when I am called among youth and I want to tell you all that a ‘Lawyer should fear none’, coming up here at the moot court reminds me of my young days. I practiced law for more than sseven decades now and now my retirement may have brought relief to many people.”
While addressing Shri Jethmalani also said that there is a need to fight against corruption and ensure that the black money of Indians in foreign country must brought back.
While addressing the gathering Padma Shri Dr. T K Vishwanathan said that, “My life revolves around law and I am always a student of law. Law has to keep the pace with the time as technology is changing and hence law should change.”
While addressing the gathering Ms Sushma Sahu, Member National Commission for Women said that, “Students are more smart than earlier days but we can not deny that crime against women is still going high every year. The youth should step forward to eliminate the problem as soon as possible.”

While addressing the gathering Ms Ruby Yadav, Mrs Universe West Asia 2015, Member Executive Committee – Delhi State BJP said that, “The law has the power to bring a positive in the society. One should practice law to build a safe and better environment for the women.”
Maj Gen P K Sharma (Retd), Director, Amity Law School while informing about the Moot Court Competition said that, “the theme of the moot court has deliberately been selected keeping in view the rising crimes against women particularly minor girls and the need to curb the same.”
The Final round of the Moot Court Competition will be held on 11th March, 2018. The winners will get certificates, trophies and cash prizes. The inaugural ceremony was concluded with a vote of thanks by Maj Gen P K Sharma (Retd.). Maj Gen BS Suhag(Retd.), Deputy Vice-Chancellor, Maj Gen G S Bal, Dean of Student Welfare, Sq Ld S K Singh (Retd.), Pranshul Pathak, Ms Monika Yadav, Ms Neha Pathak, Dr. Vikas Madhukar were present at the function with HOI’s, faculty members and law students were present in large number.