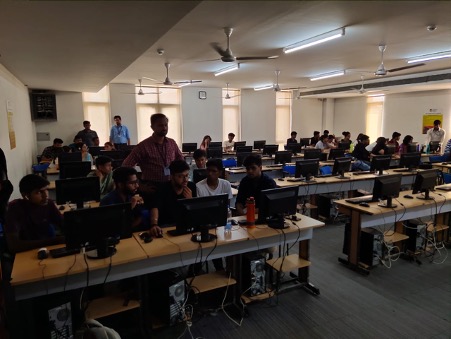 The theme of the event was to promote professional grade web development under a time limit of 24 hours to push the students to give their level best. The event received an overwhelming response consisting of 10 groups ranging from 2 members to 6 members, totally consisting of 38 participants.

The primary computer programming languages used were HTML, CSS, and JavaScript, but the competition wasn’t limited to the use of the three. Use of Frameworks outside the primary languages was permitted with the condition that the participants shouldn’t expect the judges to have any framework or software installed on their system.

The inaugural function was attended by Vice Chancellor Dr. A.W. Santhosh Kumar as the guest of honor and Director of Amity School of Engineering, Dr. Shrikant Charhate.

The competition was coordinated by Dr. Deepa Parasar and Mr. Naufil Kazi, while primary student coordinators were Ishaan Pandita and Vaibhav Guru. It officially started at 2 pm on 6th May 2022 and concluded exactly at 2 pm on 7th May 2022.

A total of 6 prizes were declared, winner, runner-up, best of first year, second year, third year and most efforts dedicated. The winning website, which is a clone website of Amity University Mumbai, renamed as Red Brick University, tries to recreate the virtual tour aspect of Amity Website and does it efficiently. The runner-up website is a horror game website which allows the user to make choices to progress in the story. Both websites had a close competition, the winner winning by just 1.25 points extra in a 100-point grading system.

The event was sponsored by Dare2Code and GDSC AUM and the participants were allowed to select their topics amongst Marketplace Design, Website Cloning and Business Website.