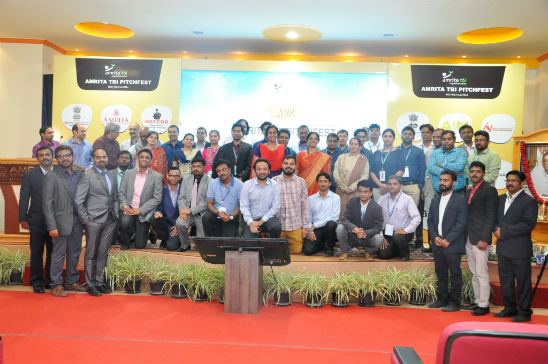 Bangalore: Yellow Messenger, Linksmart DNA, and Bookmydiamond.com – these three start-ups are the winners of PitchFest 2018 organized by Amrita Vishwa Vidyapeetham’s Technology Business Incubator. The University intends to invest $200,000 in these three ventures as seed investment.

· Bookmydiamond.com is a technology platform that helps jewelry retailers to search a live inventory of loose, certified diamonds, and buy them.

Said Dr. Krishnashree Achuthan, CEO of Amrita Vishwa Vidyapeetham’s Technology Business Incubator (TBI): “This year, Amrita TBI focused on selecting start-ups that have successfully combined innovative technologies with a high impact on India’s development. We are delighted to see start-ups coming up with ‘green solutions’ with a global appeal.”

Snehal Shetty, COO of Amrita Vishwa Vidyapeetham’s Technology Business Incubator (TBI), said: “The overwhelming response to this year’s Amrita TBI Pitchfest, especially the increase in the number and the quality of the start-ups, is very encouraging. This shows that the government’s efforts to make entrepreneurship a mainstream career choice is gaining traction.”

More than 800 start-ups from 22 states in India participated in the competition and showcased their ideas to potential investors and get incubation space at Amrita TBI. The sixth edition of the PitchFest this year was supported by Niti Aayog, Dept. of Science & Technology, Govt. of India; Indian Angel Network; Freshers World, and SAP Startup Studio.

o Saukhyam Pads: A producer of cost-effective and eco-friendly reusable sanitary pads made from banana fibre.

Amrita TBI is supported by the Government of India and is recognized under the Start-up India programme. It was awarded the Department of Science and Technology’s best Incubator award for 2016-2017 by the President of India. Amrita TBI has incubated 83 startups and mentored 216 startup ideas, and has zero loss from its investments so far.

http://www.amritatbi.com
Established in 2008, Amrita TBI is a non-profit startup incubator supported by Govt. of India and Amrita Vishwa Vidyapeetham that funds, mentors and nurtures ideas, startups and entrepreneurs.

The Amrita TBI PitchFest, organized since 2012, is an annual platform for startups across India to showcase their ideas, qualify to receive seed investments, and get incubation space at Amrita University’s Technology Business Incubator.

In May 2017, Amrita TBI won the National Award for being the best Technology Business Incubator in the country from the Dept. of Science and Technology, Government of India. The President of India, Sh. Pranab Mukherjee, presented the national awards for excellence in technology at a ceremony in Delhi. Krishnashree Achuthan, CEO, and Snehal Shetty, COO, of Amrita University’s TBI received the award (Photo attached).

Amrita TBI is one of the only six incubators selected in India to be made world-class under NITI Aayog’s Atal Innovation Mission (AIM). It was also listed among the Top-5 most prolific startup incubators in India by the Economic Times in 2015.

Talentedge Awarded for “Best Use of ICT in Education”

Organizations around the world waste Rs 6.5 crore every 20 seconds