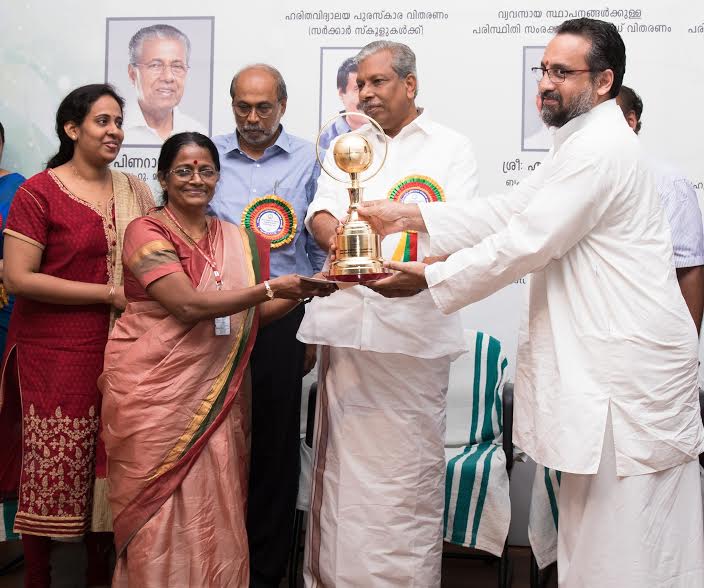 Following the Green Initiatives set into place by Chancellor Sri Mata Amritanandamayi Devi, Amrita University has established a near zero-level environmental footprint. It has also set up an elaborate recycling system that ensures primary sorting at source and a dedicated sorting station for itemized segregation of recyclable waste as well as appropriate handling of non-recyclable waste.

Said Brahmachari Sudeep, Director, Amritapuri Campus, Amrita University: “We are delighted to be recognized as Kerala’s greenest university. We have implemented state-of-the-art facilities for solid-waste treatment. An efficient in-vessel bio-digester and an organic waste composter along with a vermi-composting plant ensure treatment and conversion of biodegradable waste into organic fertilizer. A hybrid sewage treatment plant that uses aerobic and anaerobic technology, along with carbon filtration and ultra-filtration units, guarantees meticulous treatment of sewage waste. In this manner, Amrita University has accomplished 100 percent recycling of treated water. The award recognizes our substantial and sustained efforts in pollution control and environment protection.”

Usage of solar energy has resulted in reduction in overall electrical consumption at Amrita University. During the last few years, the Amritapuri campus has seen a total reduction in its carbon footprint by 1.6 lakh kgs of Co2 and a total electrical power saving of 3.1 lakh units. It has also managed to save over 93,000 tons of water through various sustainability projects. The students and staff of Amrita University’s Amritapuri campus have spent two-lakh hours in various social responsibility projects with an annual budget of Rs 2.5 crores. Projects include state-wide tree-plantation drives, organic gardening, awareness campaigns and supply of free potable water to neighbouring villages.

Amritapuri campus is among the few selected “Harita Campuses” by the state government for its “Harita Keralam” initiatives. The Kerala Government has been appreciative of the efforts made by Amrita University campus in organic farming, sapling planting and massive clean-up drives done every year at Sabarimala and many other places across Kerala.

World-class IT pros trained in Ukraine

iednewsdesk Apr 14, 2022
In a paper published today in Nature Communications, a team led by scientists from the University of California,…

University of Minnesota: Medicaid expansion had little effect on…

University of Minnesota: UMN included in national partnership to…

University of Minnesota: CIDRAP launches a communication toolkit for…