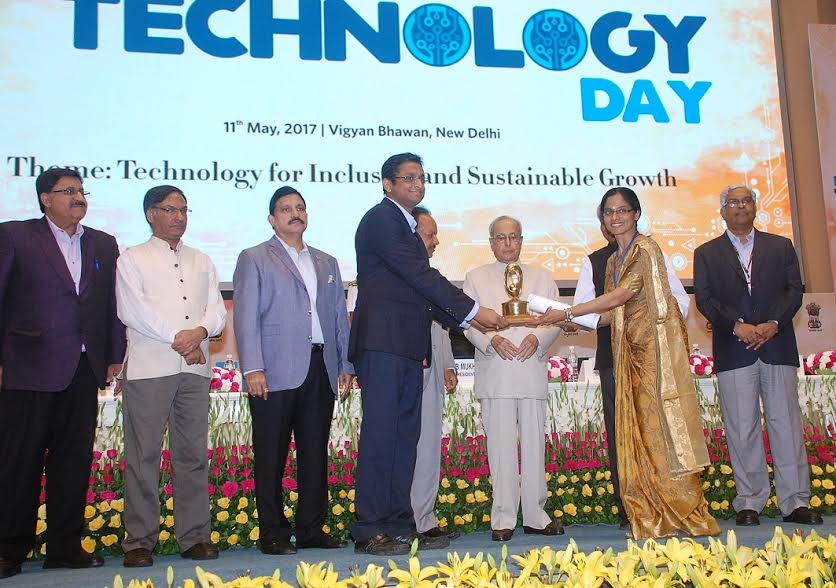 The President of India, Sh. Pranab Mukherjee, presented the national awards for excellence in technology at a ceremony in Delhi. Krishnashree Achuthan, CEO, and Snehal Shetty, COO, of Amrita University’s TBI received the award.

Said Krishnashree Achuthan, CEO, Amrita University’s Technology Business Incubator (TBI): “It is an honour and privilege to receive the National Award for excellence from the Hon’ble President of India. The Technology Business Incubator of Amrita University was established in 2008. Being judged No. 1 in India in a short span of 8 years is a testimony to the tradition of all-round excellence at Amrita University. Till now, we have incubated more than 72 startups and mentored 216 startup ideas, with 0% loss from investments.”

Amrita University’s TBI, a joint venture with Dept. of Science & Technology, Govt. of India, focuses on incubating startups in the areas of Information Technology, Cyber-Security, Networking and Social Media, among others. It recently established a startup hub to build the next wave of cybersecurity startups in the country.

Amrita University’s TBI is one of the only six incubators selected to be made world-class under NITI Aayog’s Atal Innovation Mission (AIM). According to NITI Aayog CEO Amitabh Kant, the objective is to transform the start-up ecosystem in India by providing financial scale-up support to these six “rarest of the rare” incubators and upgrade them to global standards. Each of these will receive $1.4 Mn (INR 10 crore) over a span of two years to provide state-of-the-art facilities to the incubated startups.

Amrita University’s TBI is supported by the Government of India and recognized under the Startup India program.