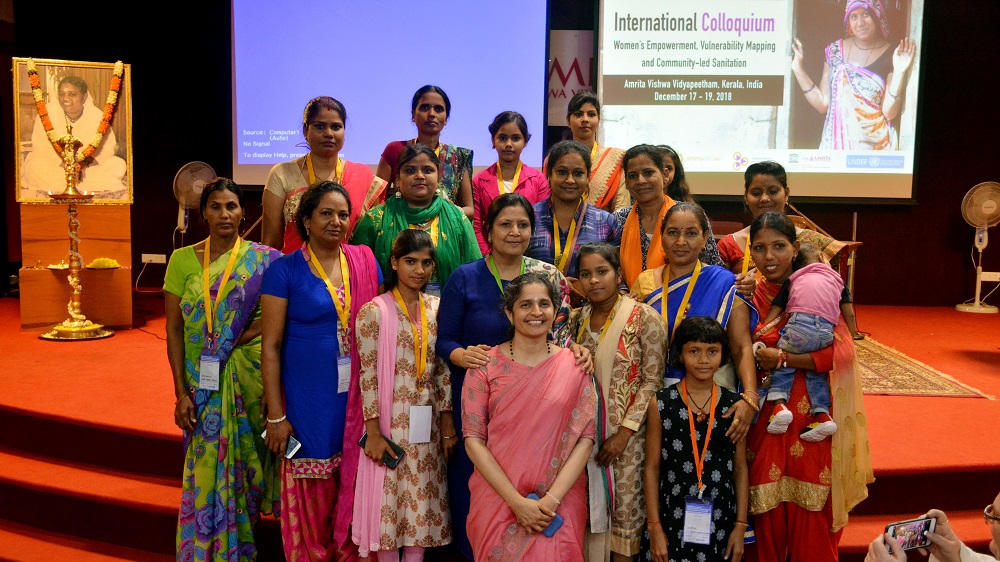 Kolam: Amrita’s UNESCO Chair in Gender Equality and Women’s Empowerment and the Centre for Women’s Empowerment and Gender Equality (CWEGE) at the Amrita Vishwa Vidyapeetham hosted a historic three-day first ever International Colloquium for Women’s Empowerment in partnership with the United Nations Democracy Fund (UNDEF) Women Empowerment Team at AMMACHI Labs at the Amrita Vishwa Vidyapeetham, Amritapuri campus, Kollam. It was decided that the Israeli Consulate of India will assist the Sustainability Development Officer (SDO)-Pilot, CWEGE in launching a new position for key women in a community to protect, monitor and report on natural resources especially water and waste management.

While Amrita has already been providing educational support to children in school and skill development to women in villages across India since 2013 through the Amrita Self Reliant Village (SerVE) adoption program, it was also decided at the colloquium that in addition to skill development initiatives, Amrita SerVE, (CWEGE, under the Pradhan Mantri Kaushal Vikas Yojana, PMKVY, Special Projects category) will start facilitating and running skill development training centers in six aspirational districts across Odisha, Jharkhand, Chhattisgarh, Tamil Nadu, and Kerala where students will be trained in critical, industry-relevant skills including Automotive Service for two and three wheelers, Healthcare Assistance, Tailoring, Plumbing, and IT/Data Entry. Some of these have already been launched and the rest will take off soon. The colloquium provided a forum for dialogue and interaction between the village ‘Champions of Change’ and representatives of the government, the United Nations, and international experts towards identifying solutions.

It saw the participation of international delegates, experts, professors, policymakers, representatives from UN partner organisations, technocrats and researchers in spirited discussions around the latest issues pertaining to the empowerment of women in a sustainable-development context. Keynote speakers included Dr. Deepa Narayan, international poverty, gender and development advisor and renowned author and speaker; the Honourable Judge Swati Chauhan, founder of Swayam Siddha an initiative for women; Shalini Prasad, UNICEF, India; Andy Carmone MPH CNM, global health expert and Director of Clinical Science at Clinton Health Access Initiative and many other top delegates from UN agencies among others.

In addition to international delegates, more than 90 women from 21 villages across 18 states of India joined the discussions and celebrated the successful completion of a joint-project by Amrita and the UN Democracy Fund (UNDEF) called ‘Women’s Empowerment: Community Sanitation Through Democratic Participation (WE:CSDP)’. As part of the UNDEF co-funded project, WE:CSDP (launched in February 2017 to address issues of inadequate community sanitation, women’s health, and water management in rural India) capstone event, interactive sessions were held between the UN representatives, academic researchers and women from villages across India.

“I am extremely proud to state that women participated as experts, sharing their experiences and successes as well as challenges to bringing sanitation to rural areas. The results of this interaction will inform an upcoming Policy Brief to recommend improvements to the GOI’s sanitation schemes. The women Champions of Change have already made incredible strides forward and have achieved considerable success in bringing development, sanitation, and sustainable development. This event provided an opportunity for women from around the country to learn from each other and interact with experts to address challenges they still face,” said Prof. Bhavani Rao, the Amrita UNESCO Chairholder.

She added, “The team from the CWEGE presented research deliverables of the UNESCO Chair and unveiled the AWESOME Framework (Amrita Women Empowerment Systems Oriented Methodology.) AWESOME is a graphical framework for capturing the state of women’s empowerment in a given geographical region at a given point in time via an as-is system map. This system map captures the interactions between six dimensions of vulnerability. Areas of collaboration have been identified and formalised including the signing of MoUs and extending the University Twinning and Network Program (UNITWIN) for regular interaction and exchange of information and experience in the upcoming years. The Women Champions of Change held formal meetings with local government over 375 times and submitted key applications including FIRs, RTIs, and petitions for infrastructure improvements. They also presented 5-year action plans for community development. The colloquium provided the ideal platform for dialogue and interaction between the village Champions of Change and representatives of the government, United Nations, and international experts towards identifying solutions.”

Dr. Deepa Narayan, international poverty, gender and development advisor and renowned author and speaker emphasized the importance of women speaking up. She said, “Voice is one of the most powerful things that we have. And yet women are told to speak softly—or not to speak at all. Reclaiming our voice is important because without voice one is not really human and there is no empowerment. Women’s empowerment is actually a men’s issue.”

Andy Carmone, MPH CNM, global health expert and Director of Clinical Science at Clinton Health Access Initiative added, “The colloquium was a bold interdisciplinary summit that allowed experts in diverse fields the opportunity to learn from each other and over 90 direct beneficiaries of CWEGE interventions. These women, of all ages and from all over India, addressed the colloquium multiple times to share their experiences with toilet construction, waste management initiatives and community mobilisation, even performing some of the street plays they wrote to engage people in their villages in the work of elimination of open defecation and waste management. This exchange enriched the complex discussion about mapping, measuring and promoting the empowerment of women in India that took place over the dynamic three day program.”