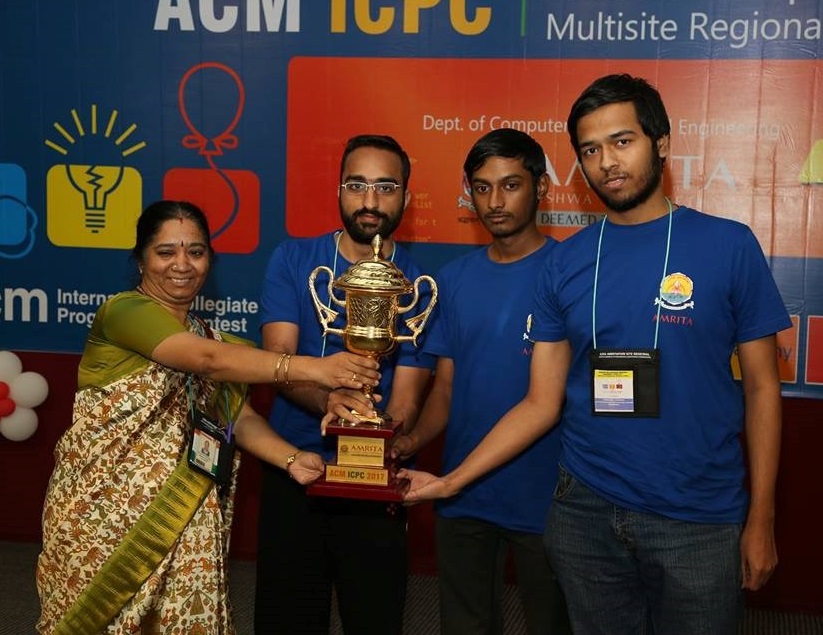 Kochi: More than 765 students from 253 colleges across India and Bangladesh have participated in the semi-finals of the global ACM International Collegiate Programming Contest (ICPC) held at Amrita Vishwa Vidyapeetham’s School of Engineering. Students from International Institute of Information Technology (IIIT) Hyderabad emerged the winners. They, along with three other winning teams from Regional Contests of ACM-ICPC in other parts of India, will participate in the World Finals to be held in April 2018 at Peking University, China.

ACM ICPC is considered the “Olympics of Programming Competitions” globally. It is the world’s oldest, largest, and most prestigious programming contest, with more than 2,700 universities participating from various countries. A team of three students from higher educational institutions compete in Regional Contests, from which top scoring teams advance to the ACM-ICPC World Finals. Students need to solve complex, real-world problems with a gruelling deadline. In the past, two teams from Amrita have participated in the World Finals.

Said Anand Shenoi, Regional Contest Director, ACM ICPC, Amrita Vishwa Vidyapeetham: “Amrita is the largest site in the world for the Semi-finals of ACM-ICPC. We have been holding this event every year since 2005, which has been instrumental in increasing student participation in coding competitions. This is significant as a recent survey states that as many as 95% of Indian engineers are unable to do coding. The Regional Contest of ACM-ICPC at Amrita has earned the reputation for being a platform for budding programmers from India to exhibit their talent at the global stage. In a short span of time, it has become the most preferred site for the ICPC aspirants because of the menu of quality problem sets prepared by World Finalists. We wish the winning team from IIIT Hyderabad all the best for the World Finals ahead.”

Amrita Vishwa Vidyapeetham has also tied up with Unacademy, a free online learning platform, to promote competitive programming in the country. In addition, CodeChef, a not-for-profit platform to help programmers make it big in the world of algorithms, computer programming and programming contests, is a sponsor of ACM-ICPC Regional Contest at Amrita.