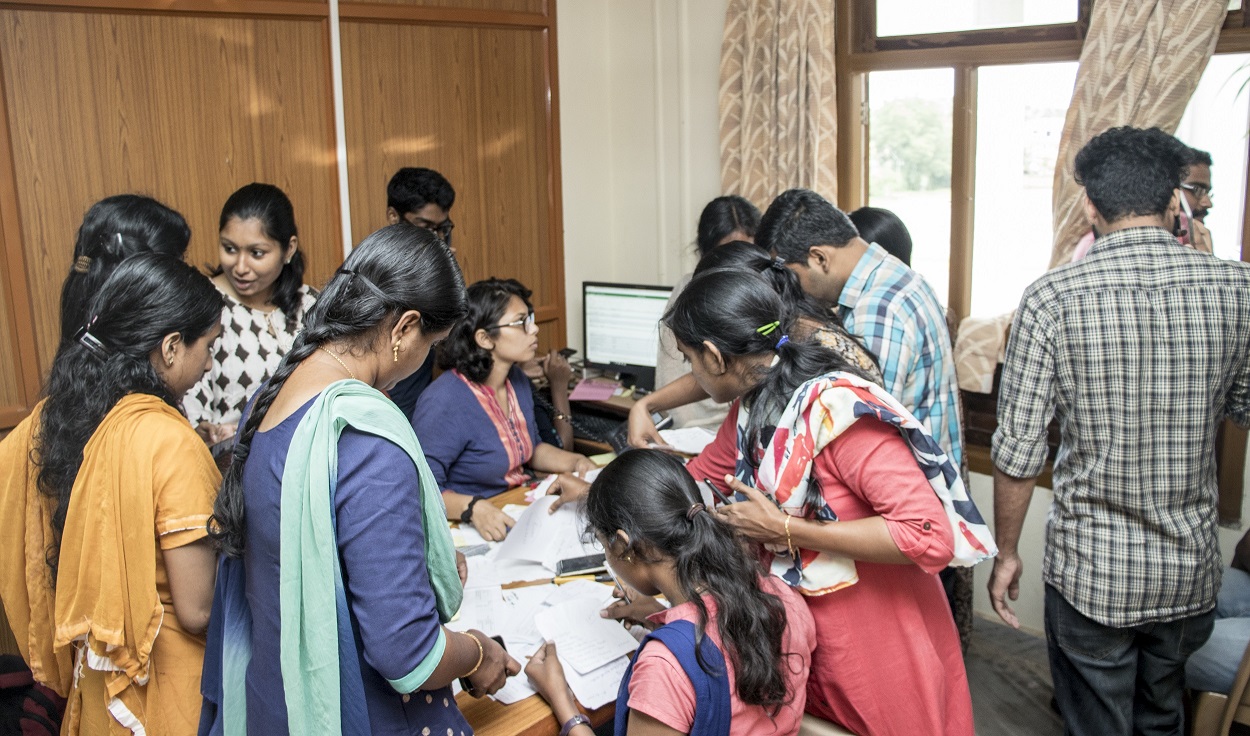 Kochi: An app designed by researchers of Amrita Vishwa Vidyapeetham for disaster management has helped locate, rescue and provide relief to more than 12,000 people stranded in floods all over Kerala, potentially saving dozens of lives.

Researchers at the Amrita Center for Wireless Networks & Applications (AmritaWNA) customized the Android app, called AmritaKripa, to specifically cater to the recent Kerala floods. Within a few days of the app’s launch, over 3,000 entries were recorded in real-time, which helped to locate, rescue and provide relief to more than 12,000 people in all districts across the state. There were also more than 500 entries from people willing to provide relief-and-rescue services. The app was used in tandem with the “Amrita Help Line” set up by students and faculty volunteers at the university’s Amritapuri campus in Kollam district.

AmritaKripa is a high-performance, multilingual, user-friendly mobile and Web application for the effective and timely management of rescue, relief and rehabilitation efforts towards the management of any kind of disaster such as earthquakes, floods, hurricanes and tsunamis. It is available for free at Google Play Store. According to Amrita officials, the app was developed keeping in mind the various needs of the end users, including disaster survivors, relief providers, relief-camp coordinators, rescue teams and administrators. Once registered, app users can select options such as “rescue me now,” “request medical,” “request supplies” and “offer supplies.”

Currently the app works in Malayalam and English, but AmritaWNA will continue to add languages, with the goal of making AmritaKripa an app that can be used by anyone, anywhere in the world. The university authorities have strongly urged people living in disaster prone areas and rescue services to download the free app on their smartphones so that it can be used in times of a natural calamity.

Dr. Maneesha Sudheer, Director of the Amrita Center for Wireless Networks & Applications (AmritaWNA), said: “Under the guidance of our Chancellor, Sri Mata Amritanandamayi Devi, researchers at Amrita are focussed on delivering solutions that directly benefit the people. This app is yet another testimony to that commitment. By directly linking the help-seekers and providers in a post-disaster environment using smartphones and the Internet, we are helping expedite the relief-and-rescue operations and improve their effectiveness by making them targeted at the individual level. We want this to be a worldwide app. The Kerala floods were its first deployment, but it is ready to be used in future disasters as well.”

During rescue scenarios, Amrita researchers found that people who required help were not always able to reach helpline numbers due to the limited number of parallel calls that helplines could handle. This was negatively impacting rescue efforts and their timeliness. To address this gap, researchers at AmritaWNA developed the app to connect survivors and rescuers in dynamic and volatile disaster situations.

Professor Sethuraman Rao, Team Leader of Amrita Center for Wireless Networks & Applications (AmritaWNA), said: “The use of smartphones with data services is widespread, even in rural areas. Even though mobile networks may get disrupted during a disaster, they also get restored rather quickly. Phone lines may get busy but the data network stays resilient. In disaster situations, pinpointing locations of survivors is the key. In the AmritaKripa app, location data is picked up automatically based on user location using real-time GPS data. Users can also enter data to the nearest landmark location, and the app has the capability to automatically identify the user’s location. By building a robust, durable suite of applications that can be readily deployed in these situations, Amrita seeks to improve the effectiveness, traceability and scalability of such efforts.”

Some key features of the AmritaKripa app are:

● Ability to request for rescue, medical help, supplies such as food, clothing, medicines, shelter, and services such as water, electricity, telephone services, etc. This feature can be used by disaster survivors and relief-camp coordinators.

● Ability to offer rescue, medical help, supplies such as food, clothing, medicines, services and shelter. This can be used by the relief providers — individuals, organizations and the government.

“Within a few hours after the launch, we started to see a lot of activity,” said Mr. Ramesh Guntha, Group Lead, AmritaWNA. “App users were able to log in and enter their information, which resulted in the ability for call centres, including our own 24×7 Compassionate Kerala call centre at the Amritapuri campus, to coordinate the rescue-and-relief efforts in the state. This app is useful in coordinating efforts for large-scale-distributed operations by collating and processing multiple requests from multiple geographical locations in real-time. The app provides a platform for survivors, volunteers, rescue workers and administrators to collaboratively work in an effective and timely manner to achieve optimal response.”
For more than a decade, Amrita Vishwa Vidyapeetham and its parent organisation, the Mata Amritanandamayi Math, have been in the forefront of early disaster warning, disaster management and disaster relief. During and after the 2004 Indian Ocean Tsunami, Amrita demonstrated exemplary work in rescue, relief and rehabilitation efforts, such as building more than 6,000 homes, providing vocational training through haptic technologies, providing free medical care through telemedicine units, and providing trauma therapy to hundreds of children.

The AmritaKripa app and Amrita’s wireless sensor network for the early detection and warning of landslides were used in parallel to help save many lives during the recent floods in Kerala. Amrita is also conducting research on the use of computer vision algorithms to estimate depth of flood waters based on photos taken from the field.

iednewsdesk Nov 26, 2021
A bespoke and detailed strategy has been launched for NHS human resources and organisational development…

Politecnico di Milano: The Team Of The Politecnio Won Third Place At…

University of Groningen: Orange the World lights up the Academy…