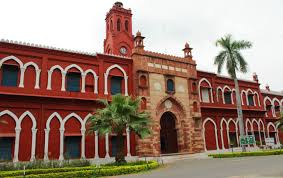 The association is also deeply aggrieved by the partisan role played by the Aligarh police and the brutal lathi-charge on AMU students who were protesting the police inaction. More than a dozen students were seriously injured. AMUOBA issued these statements after a resolution was passed in its meeting on May 6 in Delhi. Over 300 members of the association attended the meeting and the resolution shall be submitted to the President of India.

The association demands immediate arrest of those who tried to attack former Vice-President Hamid Ansari and barged into the campus brandishing weapons and shouting provocative slogans, thereby leading to an extremely volatile situation. A time-bound judicial enquiry is also among the foremost demands. AMUOBA also demands action against the policemen who were complicit in what appears to be a coordinated and politically motivated attack on the university. In addition, the cases against AMU students must be withdrawn.

The said demands must be met the soonest if the district administration wants to restore the confidence of the AMU community in the administration and peace to prevail.

Below is the resolution passed unanimously by AMU ALUMNI:

1. We condemn the breach of security by the Aligarh administration when former Vice​-President​of India and former AMU Vice​-Chancellor Mr. Hamid Ansari was present in Aligarh for a felicitation ceremony by AMU ​Students Union (AMUSU)​

2. We express our solidarity with the protest by AMU students and teachers following the brutal lathi charge on them on May 2, in which nearly 30 students were badly injured.

3. We support the stand taken by the AMUSU, the AMU T​eachers A​ssociation and other university bodies over the peaceful and democratic agitatio​n being held by the students of AMU.

5. We appreciate the steps taken so far by the university administration, and it’s proctorial and security team in handling the illegal entry of a group of armed men suspected to be affiliated with Hindu Yuva Vahini and Hindu Jagran Manch who raised slogans against AMU in May 2.

6. We demand that the Aligarh administration take strict action against the men who entered the campus and register the FIR filed by the AMU Students Union.

7. We also demand the immediate withdrawal of the FIR against hundreds of unnamed AMU students, who, we must remind, themselves were victims of police negligence and brutality.

8. We appeal to the Aligarh district as well as the AMU administration to ensure that the academic activity and annual exams in the campus are resumed as soon as possible.

9. Since the incident involves breach of security with regard to one of the highest dignitaries of the country, we demand a time-bound judicial inquiry into the events on AMU campus on and after May 2.

10. We request the media, particularly the TV news, to present the facts regarding AMU with fairness and without any bias.

We request your immediate attention to AMUOBA resolution.