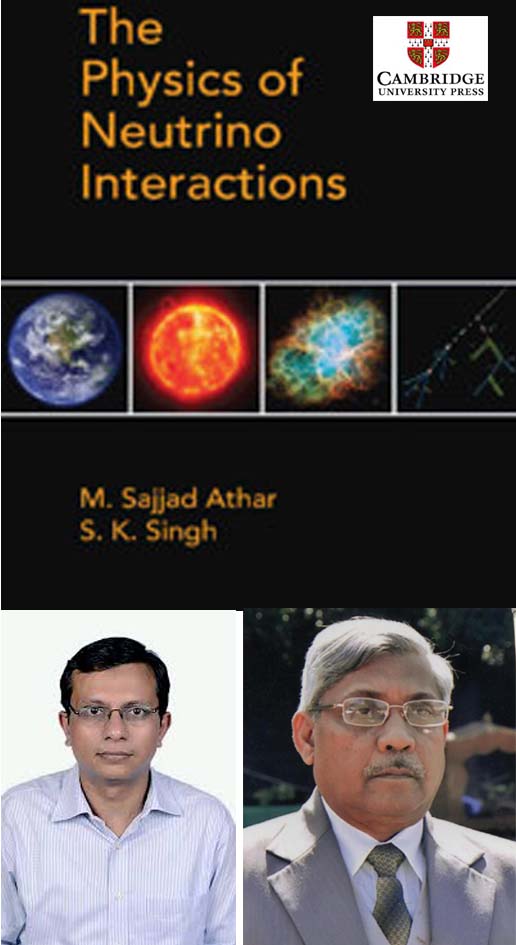 Aligarh: If you have the instinctive curiosity to understand how neutrinos, the tiny and nearly massless particles, born from violent astrophysical events like exploding stars are fantastically abundant in the universe, then you have to go through the book ; ‘The Physics of Neutrino Interactions (Cambridge University Press, July 2020)’ authored by two reputed physicists of Aligarh Muslim University (AMU), Prof Mohammad Sajjad Athar who worked with the Japanese noble laureate, Prof Takaaki Kajita and Prof S K Singh who is also a former Vice-Chancellor of a Central University, Garhwal University.

The text book published by a renowned international publisher The Cambridge University press introduces neutrino physics. It presents a theoretical framework for describing relativistic particles (described by the theory of relativity), said Prof Athar adding that the book is a pedagogical description of the neutrino, its properties and the standard model of electroweak interactions among other things.

He pointed out that the neutrinos are the universe’s essential ingredients, and they have played a role in helping scientists understand some of the most fundamental questions in physics.

Explaining the presence of neutrinos, Prof S K Singh said, “If you hold your hand toward the sunlight for one second, about a billion neutrinos from the sun will pass through it.” This is because they are shot out as a by-product of nuclear fusion from the sun, the same process which produces sunlight.

He emphasised that the topical book will stimulate new research ideas for advanced students and researchers.

Two Departments of Central University of Punjab get selected…

Both Prof Athar and Prof Singh elaborated that their textbook provides a comprehensive treatment of neutrino interactions, understanding of the phenomenological theory of weak interactions and importance of nuclear medium effects through detailed chapters.

“This book is an attempt to introduce the subject of neutrino oscillations by highlighting the need for beyond the standard model physics,” they said.

Spread over 970 pages and 20 Chapters, ‘The Physics of Neutrino Interactions’ has come at a time when the study of neutrinos is becoming central to the present knowledge of physics. Ten Nobel prizes in the last seven to eight decades have been awarded for physics either directly in the field of neutrino physics or in the topics where the role of neutrino physics has been very crucial, said Prof Athar and Prof Singh.

Prof Athar, a member of the Neutrino Panel of International Union of Pure and Applied Physics (IUPAP) and of an International collaboration of Neutrino Theory-Experiment (NUSTEC) Board, has published several papers with Japanese physicist and Noble Prize in Physics (2015) recipient, Prof Takaaki Kajita. He was also invited to join Snowmass collaboration by the USA scientists to write a ‘White Paper’ on neutrino physics. He is in collaboration of MINERVA experiment at the Fermi National Accelerator Laboratory, USA.

Whereas, Prof Singh, an Alexander von Humboldt Fellow (Germany) and Senior Associate of ICTP (Trieste, Italy) is a visiting Professor at the University of Mainz, Germany and the University of Valencia, Spain. His work on neutrino reactions has been used to analyze the first neutrino experiments from deuterium at Argonne National Laboratory and Brookhaven National Laboratory, USA. He has also served as the Vice Chancellor of the Garhwal University.

Webinar on AMU Alumni and COVID-19

MIT ADT University has partnered with Skill Lync, an Indian engineering startup, to…