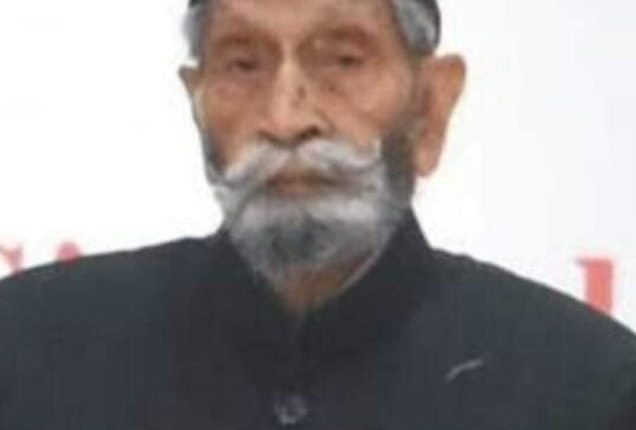 Aligarh : Nonagenarian Aligarh Muslim University (AMU) Pro Chancellor and the oldest living alumnus of AMU, Nawab Ibne Saeed Khan of Chhatari passed away on Tuesday at his Aligarh residence around 7: 15 pm. He was 98-years old.

He was laid to rest at his native Chhatari in Bulanshahar after the Namaaz-e-Janaza (Funeral Prayer) at Chhatari Masjid, Marris Road, Aligarh.

Extending condolences to the bereaved family of the deceased and AMU fraternity, the Vice Chancellor, Prof Tariq Mansoor said, “Nawab Ibne Saeed Khan Sahab represents all that we cherish and value at AMU. He will always be remembered for bringing educational and economic opportunities for all sections of society. His immense contribution to community and enkindling hope for a better tomorrow will never fade away.”

“I offer my heartfelt and deepest condolences to Nawab Sahab’s family and AMU community and pray for the comfort for his loved ones at this difficult time. He was a selfless soul who earned the admiration, respect and esteem as guide, mentor and contributor to AMU and the void created by his departure is irreplaceable. AMU and the entire fraternity mourn over the sad demise”, he added.

The Vice-Chancellor and Registrar also visited his residence and placed flower wreath on his body.

The arc of Nawab Ibne Saeed Khan’s lifetime, spanning to a sizeable portion of AMU’s history, included various roles such as the AMU Court member, Executive Council member and Honorary Treasurer. He was declared as the AMU Pro Chancellor for a second consecutive term in 2018.

Nawab Chhatari Sahab belonged to a family of generous benefactors and true well-wishers of the university. His great grandfather, Nawab Lutf Ali Khan was the convener of Mohammedan Anglo Oriental (MAO) College Foundation Committee and was present with Sir Syed Ahmad Khan at the ceremony in which the foundation stone of MAO College was laid on January 8, 1877 by Lord Lytton. Nawab Lutf Ali Khan had then famously donated gold, silver and copper coins for the capsule kept underground to mark the occasion.

The Chattari Tennis Pavilion at AMU is named after his father, Nawab Ahmad Saeed Khan.

He is survived by his sons Mr Javed Saeed and Mr Humayun Saeed, a daughter, grandchildren and great grandchildren.

As a mark of respect the university has also declared half day holiday.