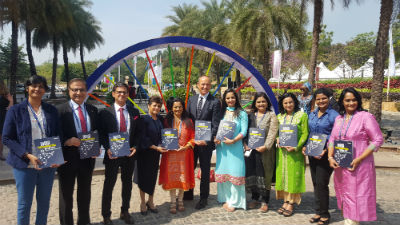 Hyderabad: In an effort to map different aspects of entrepreneurship among youth in India, Amway India, the country’s leading direct selling FMCG company, today, released the Amway India Entrepreneurship Report (AIER) 2017. The report was launched by Mr. Doug DeVos, President, Amway at the Global Entrepreneurship Summit (GES) 2017 held in Hyderabad. AIER is an annual report compiled by Amway since 2014, that promotes and facilitates entrepreneurship in the country & globally.
AIER findings are from a study conducted by Nielsen for Amway India under which they surveyed 10,809 final year undergraduate students including 6269 male and 4540 female students covering 28 cities, 28 small towns and students hailing from rural arears across 21 States of India in 2016. The report focuses on scrutinizing and understanding the student community’s attitude towards Entrepreneurship in India. From AIER 2017, it was derived that over 60 percent students in the country consider entrepreneurship as a good prospect for earning a livelihood.

Unveiling the report, Mr. Doug DeVos, President, Amway said, “India is well positioned for an entrepreneurial transformation. The country is already a top 10 global market for us and we’re excited to be part of its future growth. Amway was founded nearly 60 years ago on the spirit of entrepreneurship and is committed to creating opportunities for people who seek to be entrepreneurs.”
Speaking on the entrepreneurial opportunities Amway offers for the youth in India, Mr. Samir Behl, Regional President, Europe, Africa & India, Amway said, “Millennials are quickly becoming the biggest demographic segment in the workforce. Their strong networks, collaborative culture and deep desire to learn to make them a perfect fit to take-up entrepreneurship as a career by choice.”
Commenting on the findings from the AIER 2017, Mr. Anshu Budhraja, CEO, Amway India, said “Young entrepreneurs are shaping the Indian economy. Several initiatives by the Government like ‘Start-Up India’ have motivated many young entrepreneurs to implement their ideas, thereby increasing the number of jobs in India. Amway has aligned itself strongly to the Government of India’s target of integrating entrepreneurship proficiency into the current social and education system of the country via numerous programs.”

He further added, “Amway India Entrepreneurship Report 2017 mirrors the current sentiment prevailing in the country which is positively inclined towards entrepreneurship, and we at Amway witness a similar trend with more and more young people joining the Amway business. We will continue to focus our efforts towards empowering budding entrepreneurs, and promoting entrepreneurship in the country.”
AIER 2017 chronicles the perception of students in four distinct areas namely – Perception on entrepreneurship, Entrepreneurship as a career choice, Entrepreneurial environment & Entrepreneurial education.
Two-Thirds of Indians view entrepreneurship positively
India continues to be a land of opportunities offering excellent scope for those who want to turn entrepreneurs. AIER 2017 reflects that 61% of students consider entrepreneurship as being a good prospect to earn a livelihood in India. Students from rural areas show greater willingness to start their own business over students from urban areas. Among the 28 states, students Himachal Pradesh, Haryana, Gujarat, Assam, Delhi and Tamil Nadu can see themselves starting their own business.
Student respondents rated good education (44%), financial security (33%) and social/family network (30%) as the top 3 crucial mantras for entrepreneurial success. The perception of ‘riskiness’ of entrepreneurship was reflected in one-third of the respondents rating ‘financially secure family background’ as a most important determinant of success.
Over 60% of students have considered entrepreneurship
There is a lot of hope for enterprise in this country. Notably, the entrepreneurship receptiveness was significantly higher among students from higher-income strata. Openness to start businesses was the highest in Madhya Pradesh (47%), followed by Gujarat (45%), Bihar (24%), Himachal Pradesh (23%) and Haryana (21%). However, ‘the fear of failure’ was found to be the major obstacle in starting a business among 71% of the students.
Students seek government & social support for starting their own business

61% of nationwide respondents were hopeful of receiving support from government schemes if they were to start their own businesses. The trust placed on the effectiveness of government schemes was particularly high in Madhya Pradesh (91%), Gujarat (82%) and Punjab (81%).
81% of nationwide respondents’ state that they will depend on their household members for support while starting new ventures. The faith in the family support system was particularly strong in Jharkhand (97%), Gujarat (96%) & Punjab (96%).
Indian youth desires Entrepreneurial courses to be included in the curriculum

A clear majority (80%) of the respondents unequivocally state that they believe that ‘entrepreneurial skills’ can be taught and are not necessarily inherited. To facilitate this, a majority (78%) categorically expressed a need for substantial changes in the present education system with 75% appealing for entrepreneurial courses in the curriculum.
Thus, to grasp and retain student interest in entrepreneurial education, which, in turn, will help make entrepreneurial education more effective, educators need to focus on more out-of-the-box techniques that are in touch with the reality of the everyday world of an entrepreneur and does not simply rely on theoretical pedagogy.