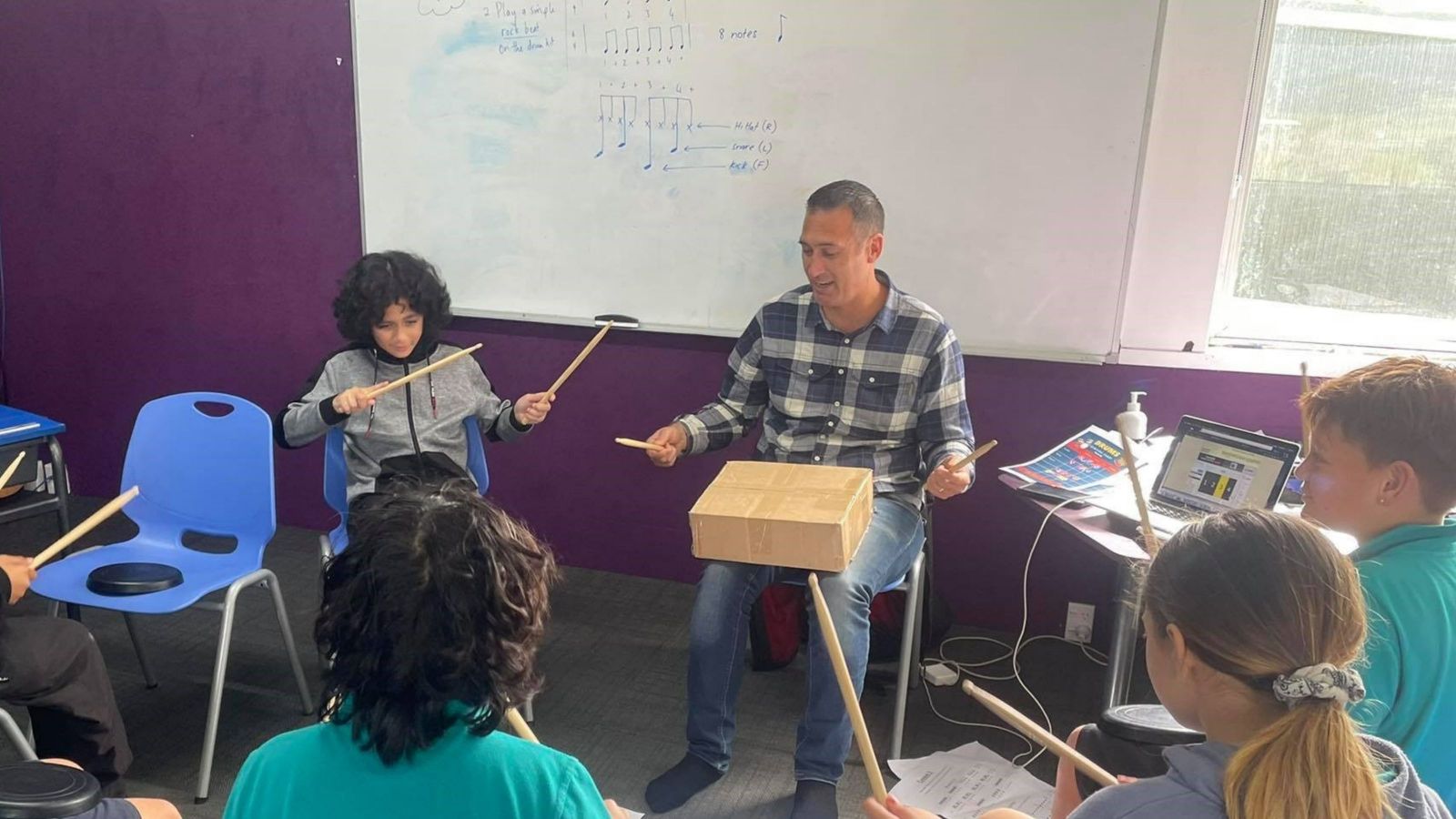 An alumnus of Te Herenga Waka—Victoria University of Wellington’s New Zealand School of Music—Te Kōkī (NZSM), Jonathan wants to share his talents as a music teacher with the younger generation in his hometown of Kaitaia.

In August 2021, he launched Te Hiku Music Academy, a pilot programme to teach music to primary school students. Te Hiku is the Māori name of the Northland region, meaning tail of the fish. He says the academy idea came about after years of teaching music at secondary level and seeing that the potential of his students could be vastly improved if they started learning at an earlier age.

“Having taught in this area before, everyone agrees there’s ample talent up here, but there’s a disconnect from the resources,” he says.

“If there isn’t a culture of music lessons before you get to high school, then it is difficult for students to fulfil their potential in music.”

Te Hiku Music Academy is being piloted with year five and six students at Kaitaia Primary School, and Jonathan says the response from the school couldn’t have been more open from the moment he pitched the concept to principal Brendon Morrisey.

“The principal there is a real big community thinker. His response was ‘what can we do to make this happen?’. They found $4,000 to buy instruments and gave me one day a week stipend to host the pilot programme. I was happy to do it for free! But they offered me a temporary contract,” he says.

The approach so far has been simple: six students from the school have been selected to attend the pilot programme. For four weeks they will learn drums, guitar and keyboard in small groups under the teaching of Jonathan and an old schoolmate and fellow musician and teacher, Damien Rice.

“What I’m wanting to do, in addition to identifying talent, is to provide an opportunity for all students to have a go at music and an instrument,” he says.

“Eventually the idea is that we will start a lunchtime ensemble with students who are inclined towards a certain instrument and form a school band. From there, I’m hoping we’ll find those students who are passionate to learn more and can do after school lessons in small groups or one on one, so when they get to college they’ve been playing the instrument for 3-4 years and have as much skill developed as someone in the main centres,” he says.

He has been running the classes for several weeks now, and says the kids are “super enthusiastic”.

“Obviously as a teacher, it’s a dream to be able to teach a group of just six kids. And they feel lucky, you know, they feel like they’re doing something special.”

His time at the NZSM has helped him to understand the importance of “being good at your craft”.

“I found my time at NZSM hugely challenging. Being amongst that melting pot of talent and drive, the competition was huge. I would say it’s given me a clearer idea of what it takes to be good at your craft. The phrase I find myself using is ‘excellence is not accidental’. You don’t just suddenly become good at anything,” he says.

Jonathan also completed a summer internship with Ngā Pae o te Māramatanga, New Zealand’s Māori Centre of Research Excellence, where he conducted research on Māori jazz music in Aōtearoa. He says the support he received from the University’s Assistant Vice-Chancellor (Mātauranga Māori) Meegan Hall as his supervisor was fantastic. The experience provided him with insights into how maximising a person’s natural talent for music can make a big difference and affirmed in his mind the importance of freedom of expression in music, and jazz in particular.

Jonathan isn’t the first alumni to develop an academy for young musicians; he has connected with Jonny Wilson who founded the Goodtime Music Academy in Lower Hutt, and Ally Mawhinnery with his programme, Epic Music Academy, in Palmerston North, who have both provided guidance and advice.

Te Hiku Music Academy’s pilot programme will finish up at the end of this year and begin at a new school in 2022. Long-term, the goal is to serve the whole of the far north.

“In my mind, my strategy is to have five music buses teaching in the North, East, South, West and Central Far North. If I could park up one or two days a week and cover their music programme, that would be awesome. From there, I’d identify a handful of kids to whom I could offer music lessons at a central location. That’s where I envisage it going.”

University of São Paulo: Collective awareness is needed to control the emission of waste in the marine environment