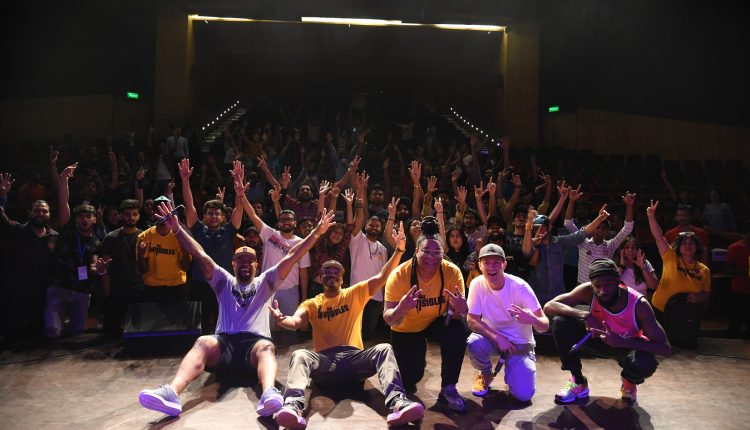 An extraordinary evening by the American Hip-Hop Group in Chandigarh

An extraordinary evening by the American Hip-Hop Group in Chandigarh Chandigarh – An American Hip-Hop Group, ‘THE INV!S!BLES’, performed at the Main Auditorium, Tagore Theatre, Chandigarh today. Beginning the India tour with the first city, the band conducted a workshop for the up and coming talent on April 19, 2022, at the Mini Auditorium, Tagore Theatre. The musical extravaganza, Bridging Cultures Through Hip-Hop, is an initiative presented by the U.S Embassy and Consulates in India, in association with the American Voices, and produced by Teamwork Arts. The musical ensemble created an electrifying atmosphere within the audience featuring internationally acclaimed artists, namely Carl “DJ Invisible ” Hollier, Richie “Robot” Steighner, Miz Korona, Hans Pierre and Khary Kimani Turner. The tour successfully shared the positive messages of hip-hop, diversity, and self-expression, and facilitated transcending the social, cultural, and racial values in favour of inclusion. All the appropriate COVID-19 protocols were followed during the performances in order to provide a safe and sound environment for all its attendees.

After an astounding performance in Chandigarh THE INV!S!BLES looks forward to its live show in Hyderabad from April 22 to April 23, 2022, at Indoor Stadium – St. Francis College for Women.

Massachusetts Institute of Technology: Looking forward to forecast the risks of a changing climate