Johns Hopkins University awarded an honorary doctorate to German Chancellor Angela Merkel on Thursday in a ceremony that celebrated the longtime leader’s contributions to world affairs and the strong ties between her nation and the university.

JHU President Ron Daniels officially welcomed Merkel to Johns Hopkins, America’s first research university founded on the German academic model, likening her new status as an alumna to a homecoming. Before conferring her degree during the ceremony at the School of Advanced International Studies in Washington, D.C., Daniels credited Merkel for helping to keep democracy alive by using her nearly 16 years in office to be “a vocal defender of human rights even in the midst of growing nationalism and isolation.”

“Raised in East Germany under the dark shadow of the Stasi, Angela Merkel witnessed firsthand the methods by which a closed society inhibits authority and treats citizens as expendable,” Daniels said. “Thanks in no small part to her immense contributions and to her steady hand, she has helped to ensure that Germany and so many other European nations have remained open, dynamic societies that place a premium on freedom of speech and thought, that welcome dissent in heterodoxy, that encourage the free flow of ideas, and support the view that nobody is expendable and everyone counts.”

In her acceptance speech, Merkel mourned the 4 million lives lost around the world to the COVID-19 pandemic while expressing her gratitude for Johns Hopkins University’s efforts to gather and disseminate lifesaving data about the disease. While acknowledging people everywhere are fatigued by the demands of the pandemic, she emphasized that now is not the time for anyone—including the JHU researchers behind the data—to relax.

“We need to take the daily numbers, the data, the facts on the development of the pandemic as seriously as we did during the first days,” Merkel said. “Ever since January 2020, the data of the Coronavirus Research Center provide tools to the public, to researchers, and also to politicians with which they can monitor the development of the pandemic almost in real‑time. … I’m truly grateful to you for this valuable work. I, myself, have benefited a lot from these figures and have used them repeatedly.”

After her speech, Merkel answered questions submitted by students attending the ceremony and relayed by Daniels. The first question—how confident can younger generations feel about meaningful global action in response to climate change?—came a day after torrential rains devastated the western German countryside, leveling small villages and claiming more than 30 lives. Merkel, a longtime advocate for mitigating climate change, replied that it is arguably “the challenge of our times.” She spoke of the need for a multifaceted approach that would include major world powers setting and adhering to bold goals for carbon neutrality and dedication to being open‑minded about green technologies. 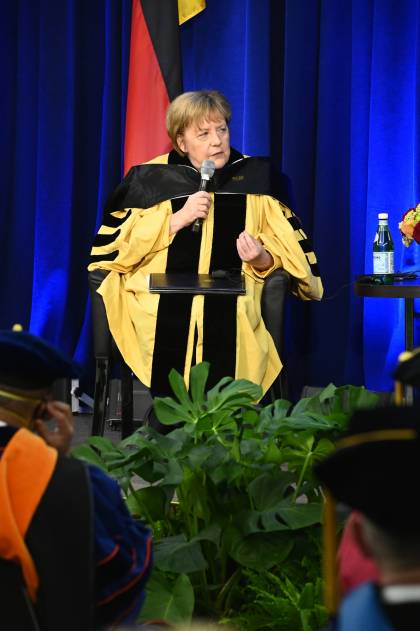 Image caption:Merkel speaks at the honorary degree ceremony held in her honor at SAIS

“It means a full transformation, a profound transformation of the way we live, of the way we do business,” Merkel said. “It doesn’t work without also having to invest heavily in research and innovation. And we also have to try to enlist the support of our population.”

Another student sought insight on how the world can defend democracy against rising nationalism, extremism, and polarization. Merkel said that the responsibility for defending democratic ideals rests on the shoulders of politicians but also upon everyday citizens around the world, particularly when it comes to using social media platforms where misinformation can spiral out of control.

“You feel sort of heartened by the fact that each and every one thinks the same as you. And in this way, they can strengthen democratic institutions because obviously you can rally around in a bubble for good purposes, but also for very bad purposes,” Merkel said. “And I don’t think we have thought this through very carefully. We’re working on this right now, and we have to actually be successful because if not, it will mean a very big danger to the way of life as we’ve known it.”

In closing remarks, Jeffrey Rathke, president of the university’s American Institute for Contemporary German Studies, thanked Merkel for her leadership and dedication in an increasingly complex world and mentioned how scholar and former JHU President Steven Muller once hoped for a leader like her to emerge.

“At the time Angela Merkel’s political career was just beginning, after German reunification, a Johns Hopkins scholar wrote that a new German leadership should emerge capable intellectually and politically of enabling the Germans to rise above past torments and to become, as he put it in musical terms, the key to the fugue of Europe,” Rathke said. “I think he foresaw much of the service that you have rendered to Germany and to the international community, Madam Chancellor.”

After the ceremony, Merkel departed for a meeting with President Joe Biden at the White House during what is expected to be her final visit to the U.S. as chancellor.

University of Exeter: Fish study shows role of oestrogens in sense of smell