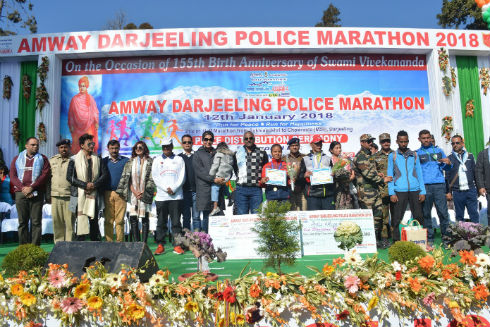 Shri Chandra Chakraborty, Regional Manager, East, Amway India, said, “We are delighted to continue our relationship with Darjeeling Marathon for the fifth year in a row. The event has become bigger with each passing year. We hope that this marathon will inspire more people to live and adopt a healthy lifestyle.”

The fifth edition of the Amway Darjeeling Police Marathon has been a Half Marathon covering a stretch of 21 kilometers for professional runners as well as sports lovers and fitness enthusiasts in both men as well as women categories. The top rankers in all the categories were rewarded with a cash prize, a medal and a certificate. There was a cash prize of Rs 1.5 lakh for the winner; Rs. 75,000 for the first runner-up and Rs 50,000 for second runners up. In addition, there were more prizes as well as special gift hampers sponsored by Amway India for the top finishers.