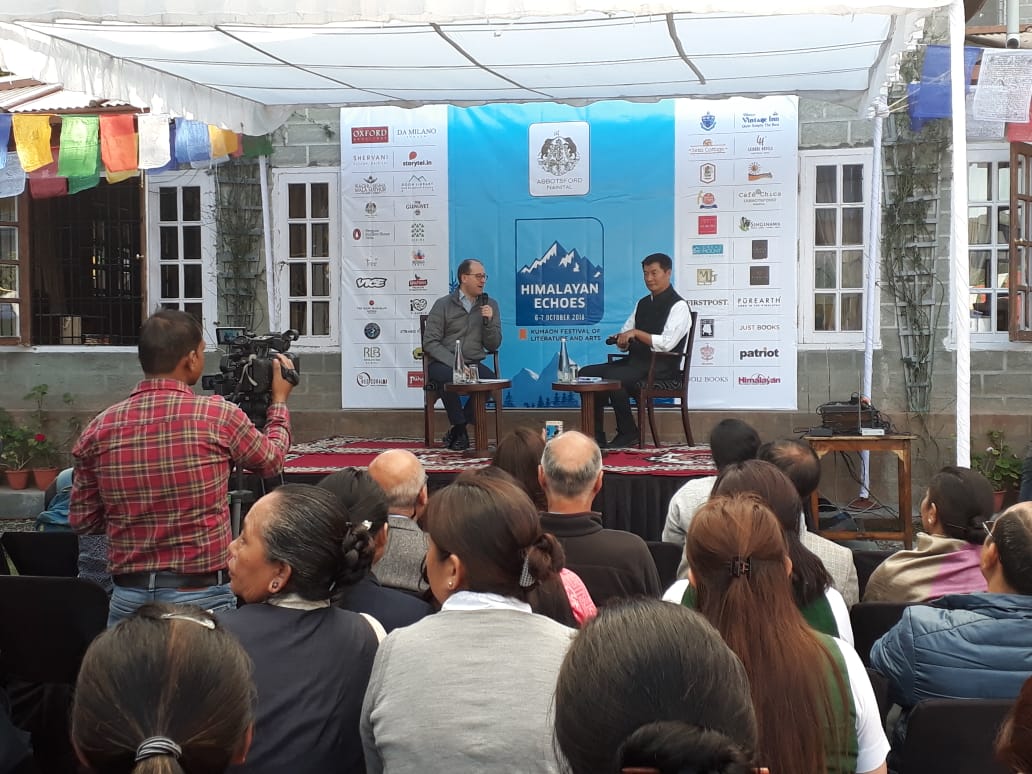 India’s fascination with Tibetan diaspora since 1959 goes a long way in shaping the socio-cultural, economic and political dimension of the land and its people.

At Himalayan Echoes today, Dr.Sangay was in conversation with Patrich French (world renowned British writer, historian and academician. Some of his famous works includes Tibet, Tibet:Personal History of a Lost Land, India: A Portrait, Younghusband:The Last Great Imperial Adventurer)) , shared his thoughts and ideas on the present and future possibilities for Tibetans in India under his young leadership.

Tibetan community heads and other local lumanaies from the DSB university and UGC were present at the session.

They discussed the Central Tibetan Administration’s ‘Thank You India!’ initiative, marking 60 years since the Dalai Lama and the first Tibetan refugees came to India.

Dr Sangay said: “No country has done more for Tibet and the Tibetan people than India. We stand on our own feet because of India. We have dedicated this year for India, and I have come to thank the beautiful state of Uttarakhand.”
Dr.Sangay highlighted the vital importance of Tibet for its impact on global environment. Tibet is often referred to as the Third Pole with its large icecap from which most of the major rivers of Asia emanate. About 1.4 billion people depend on this water from Tibet. As per NASA’s estimate 70% glaciers of Tibet will melt by 2100 causing huge damage to the global climate.

Dr.Sangay highlighted that the Tibetan movement has been successful in preserving their identity, culture and spirituality. In fact contrary to the effort by colonizing powers to eradicate Buddhism, Buddhism has flourished throughout the world including in China itself. And this is a big victory. He added that it is quite possible the next Dalai Lama is selected in exile even though the Tibetan movement will push for continued conversation with the Chinese.
Dr French said: “It’s lovely to be back in the hills, and to be in conversation with Sikyong Lobsang Sangay. My first journey to Tibet was in 1986 when I was a student, and it is a pleasure now to meet the Tibetan community in Nainital.”

Dr. Lobsang Sangay is the president of the Central Tibetan Administration (CTA). He has been Chief Executive of the Tibetan Government-in-Exile since 8 August 2011. After graduating from the Tibetan school in Darjeeling, Dr.Sangay received his B.A.(Hons) and LL.B. degrees from the University of Delhi in India. He was offered a Fulbright Scholarship to attend the Harvard Law School and is an expert on International Human Rights Law, Democratic Constitutionalism and Conflict Resolution. He is referred to as the “kind-hearted lion.”

Patrick French (born 1966) is a British writer, historian and academician. He was educated at the University of Edinburgh where he studied English and American literature,[1]and received a PhD in South Asian Studies. He was appointed as the inaugural Dean of the School of Arts and Sciences at Ahmedabad University in July 2017.

French is the author of several books including: Younghusband: the Last Great Imperial Adventurer (1994), a biography of Francis Younghusband; The World Is What It Is (2008), an authorised biography of Nobel Laureate V. S. Naipaul which won the National Book Critics Circle Award in the United States of America;[2] and India: A Portrait (2011).

During the 1992 general election, French was a Green Party candidate for Parliament. He has sat on the executive committee of Free Tibet, a Tibet Support Group UK, and was a founding member of the inter-governmental India-UK Round Table.

On 5th October 2018, Dr.Lobsang Sangay inaugurated an art installation at Old Ghoda Stand, Mallital. This art installation is an outcome of the five day workshop organized by Youth 4 Gandhi in partnership with Artreach India to empower children from under-resourced communities to find their creative potential and share the message of environment conservation and sustainable living.

This indeed was a unique and special evening and also auspicious since it kicked off the third edition of Himalayan Echoes, Kumaon Festival of Literature and Arts.