Anti-Asian discrimination on the rise in Canada, U of T researchers find

Anti-Asian discrimination is on the rise in Canada, with reports of discriminatory incidents more than tripling over the last year.

That’s according to the preliminary results of a two-year study co-led by social demographer Weiguo Zhang, an associate professor of sociology at the University of Toronto Mississauga. The research team – which includes Xiaolin Wei, an associate professor at U of T’s Dalla Lana School of Public Health, and researchers from Ryerson University and Memorial University – explores the experiences of Chinese Canadians during the COVID-19 pandemic.

The study notes that the Canadian Chinese community was already taking precautions by February of 2020, when Canada had just eight confirmed cases of COVID-19. That includes avoiding restaurants and cultural gatherings such as Lunar New Year, wearing face masks and self-isolating after returning home from trips abroad. 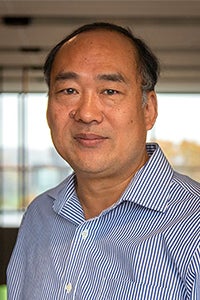 “At that time, the Chinese community was taking action to isolate themselves and provide mutual help to each other,” Zhang says.

The study, which aims to assess the prevalence of racial discrimination against Chinese immigrants and the likelihood of experiencing discrimination across social groups, launched in April 2020 with an online survey of 700 Chinese respondents living in Canada.

About 11 per cent of respondents to the April survey indicated that they had experienced incidents of discrimination since the start of the pandemic. Respondents to the April survey also reported feeling higher levels of anxiety, depression and fear since the pandemic began – data that will help the researchers better understand the relationship between racial discrimination and psychological distress in the context of COVID-19.

By contrast, preliminary results from a second survey conducted in early 2021 revealed a sharp rise in discriminatory experiences, with more than 35 per cent of respondents indicating they had experienced an incident of discrimination.

Qualitative interviews with 60 respondents, conducted in the summer of 2020, revealed differing attitudes about what constituted discrimination that was split along age demographics. Younger and middle-aged respondents (aged 18 to 25 and 25 to 64, respectively) were more likely to identify incidents as discriminatory, while seniors (aged 65 and up) were reluctant to use that label.

Zhang, who opted to wear a mask himself during the early days of the pandemic, recalls visiting a medical clinic where he was bumped to the front of the line. He says he wonders now if it was because people felt uneasy when they spotted an Asian person wearing a mask. “Sometimes, it’s difficult to judge what is discrimination,” he says.

Zhang notes that older community members may be less likely to experience discrimination because they are not working or going out of the house during lockdowns. They may also cope with discrimination by ignoring it or trying to avoid situations where they might experience trouble. In contrast, the middle-aged demographic was more likely to suggest finding solidarity with other racial groups experiencing discrimination.

“We think that some people are trying to mitigate the impact by playing down the discrimination, so they don’t get hurt as much, or avoid thinking about it,” Zhang says. “Sometimes they say: ‘If you see discrimination everywhere, you will be troubled all the time.’”

Zhang says he was surprised to find that self-reported experiences of discrimination crossed all socio-economic demographics within the Canadian Chinese community.

“People with high income or low income, people who speak English or don’t speak English, people who come earlier or new arrivals – there’s no difference,” Zhang says. “Nobody is protected by money, gender, disability or language abilities. It’s not because of status – it’s because of our appearance and racial background.

“The Chinese community has disproportionately experienced discrimination because of where the COVID-19 virus originated from,” Zhang says. “We are trying to understand the impact of discrimination on well-being, and how we can help as individuals and community members.”

Zhang says it could be that the racism was simply better hidden before the pandemic, which brought racist attitudes to the surface.

“In normal years, discrimination is less apparent, but never totally gone. It is a continuous and never-ending work for all of us to work together to end it,” he says.

“Chinese people have experienced historical systemic discrimination. Being aware of it, and how to fight it is important.”

The researchers saw a unique opportunity to study the experiences of Canada’s Chinese community since the Greater Toronto Area is home to one of the largest Chinese communities in the world outside of China. With a grant from the Canadian Institutes of Health Research, the researchers launched a two-year study of a group they feared would “bear the brunt” of the virus’s social impact.

A Sustainable Ocean Economy is Key to Indonesia’s Prosperity