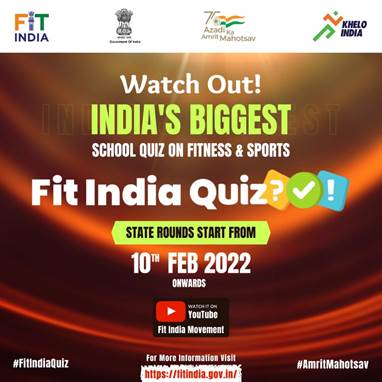 New Delhi: Union Minister of Youth Affairs and Sports Shri Anurag Thakur along with elite athletes cheered up the students ahead of the State rounds of the first-ever Fit India Quiz, scheduled for a February 10 start. 360 schools from 189 unique districts across 36 States and Union Territories will be competing for the honours.

Union Minister Shri Anurag Thakur stated, “Our Hon’ble Prime Minister Shri Narendra Modi had given out the clarion call to join the Fit India Movement couple of years back. Taking his vision forward, we launched the Fit India Quiz – India’s first school fitness and sports quiz.” “I congratulate all the students across India who participated in the preliminary round of the quiz and I wish all the State-round competitors all the best and hope you make your school, district and State proud”, Shri Thkaur added.

The State rounds will be a web-based round with 8 to 32 teams competing to become the State champion. The event will also be webcast on social media handles of the Ministry of Youth Affairs and Sports, the Sports Authority of India and Fit India. The Quiz has prize money of Rs 3.25 crores which will be given out to winning schools and students at various phases of the quiz.

Joining Shri Thakur is a plethora of elite athletes who have wished the participating students all the best for the upcoming rounds. “I wish all the best to the participants,” mentioned Tokyo Olympics silver medalist Mirabai Chanu. “I hope all the students give their best and everyone cheers for their State to become the first-ever Fit India Quiz champion,” added Sharad Kumar, Tokyo Paralympics bronze medallist. Table Tennis star Manika Batra said, “I wish the participants all the best. May the best State win.”

A total of 36,299 students from 13,502 schools participated in the Prelims of the Quiz and it saw an equal participation from boys as well as girls. Two students from Uttar Pradesh outperformed students from all other states to become the top scorers of the Preliminary Round. While Divyanshu Chamoli of Delhi Public School, Greater Noida won the top spot, he was closely followed by Shashwat Mishra of Sunbeam School, Lahartara, Varanasi. The duo was followed by Arkamita of Baldwin Girls High School, Bengaluru, who is also the top scorer for the state, Karnataka.

Following the State rounds, the 36 school teams (winner from each State and/or Union Territory) will move to the National Round that would take place later this year and would be telecast on Star Sports and webcast on multiple social media channels.