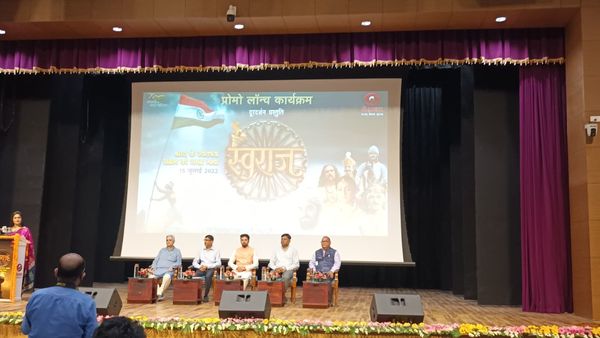 New Delhi: Information and Broadcasting Minister Anurag Thakur on Friday launched the promo of a new serial ‘Swaraj: Bharat Ke Swatantrata Sangram Ki Samagra Gatha’ in New Delhi. This serial is going to be telecast on Doordarshan from 14th August 2022. The 75-episode serial will highlight the contribution of the freedom fighters and unsung heroes of the freedom struggle. This serial will also be broadcast on All India Radio.

Mr. Thakur launched the serial logo at the Akashwani Bhawan in New Delhi. Addressing the gathering, Mr. Thakur said, the nation is celebrating the Azadi ka Amrit Mahotsav and the government has organized several programmes across the country wherein crores of people have participated. Talking about the new docudrama Swaraj: Bharat Ke Swatantrata Sangram Ki Samagra Gatha, he said, the launch of the promo is a reflection of Swaraj which was envisioned during the freedom struggle.

He said, this serial will be telecast in 10 languages which will provide an unique opportunity to the people to get a better understanding of the country’s freedom struggle. He expressed hope that people will remember the old days of Doordarshan and it will break the old viewership record of Doordarshan.

He said, India was made the first ever official Country of Honour at Cannes Film Festival, which was a big achievement for the Indian film industry. He stressed that efforts need to be made to enhance the quality of the programmes and make them more engaging.

The Minister lauded the efforts of All India Radio which broadcast the programme Azadi ka Amrut Mahotsav to highlight the contribution of the freedom fighters and unsung heroes. He also appreciated the AIR effort for providing a unique opportunity to the young people to become a Radio Jockey in the AIR Next programme. He said, this programme has provided a platform to young people to share their views on freedom struggle and Azadi ka Amrit Mahotsav.

During the event, Information and Broadcasting Secretary Apurva Chandra said, through this serial, people will get the better understanding of the contributions made by the freedom fighters and unsung heroes.

CEO of Prasar Bharati, Mayank Agarwal said that the story of the serial will start from year 1498 when Portuguese explorer Vasco da Gama reached India. He said, this serial will highlight the various facts of Indian freedom struggle.