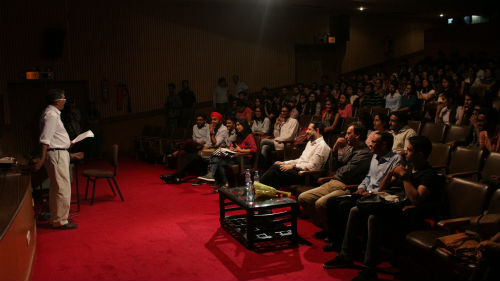 New Delhi: Shyam Bhatia, foreign journalist and award winning war correspondent delivered key lecture on ‘War Reporting’ at Apeejay Institute of Mass Communication. Mr Bhatia has served as the Middle East Correspondent & Diplomatic Editor of The Observer, London and was selected as the Foreign Journalist of the Year in the prestigious annual British Press Awards, 1994. Recollecting his experiences and the challenges he faced while reporting from conflict zones, he shared stories about his encounters with life- threatening circumstances while reporting on conflicts and war torn areas around the world which he penned in his book ‘Bullets and Bylines: From the Frontlines of Kabul, Delhi, Damascus and Beyond’.
For students aspirng to report on conflicts, he reiterated that passion for one’s job, courage, smart thinking and developing a good network are of paramount importance. Talking about the need of a war correspondent reporting objectively, he said, ”It is extremely important for a war correspondent to withstand pressures that come from above. It is his duty to convey factual accounts of what’s happening on ground to the public.”
Considering himself as one of the lucky few who have lived to recall and recount unique survival stories, he spoke about his eyewitness experience of a mini massacre on the Kabul to Kandahar highway, followed by his own detention, torture and daily threats of execution by the Mujahidin. Just as gripping were his accounts of uncovering mass murders in Delhi, breaking the story of the Israeli-Egyptian peace treaty, as well as his encounter with the besieged Marsh Arabs of Iraq that won him the Foreign Journalist of the Year award.
Mr. Bhatia ended the session by saying, “I never set out to be a war correspondent, but it was the profession that chose me and while it is a risky job, I’m happy that I could give voice to those who don’t have one.”