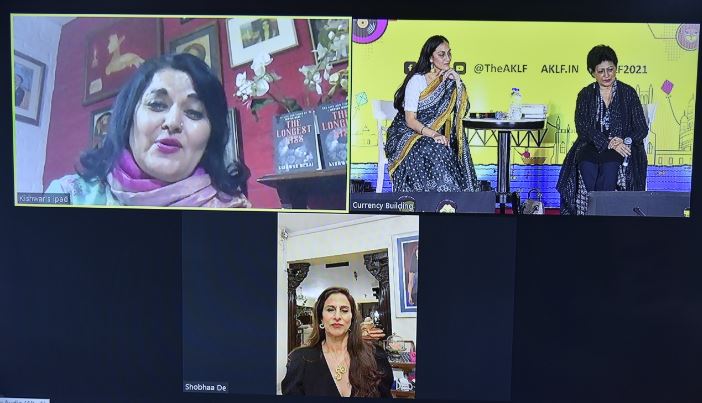 The authors spoke widely about the unique female protagonists of their book. Shobhaa De spoke about an untamed and incandescent Srilaa who experiences womanhood and confronts her sexual curiosities, misgivings, and desires, but continues to hope daringly and love fearlessly—refusing to live her life by the unrealistic standards society often sets on unconventional women. Eventually, she becomes Srilaaji and every time life crumbles her down she rises from the ashes like a phoenix.

Kishwar Desai‘s spoke about the lead lady Devika Rani from her book, The longest kiss highlighting Devika Rani’s marital and career life, the romance and the abuse that characterised her marriage with Himansu, the struggle of being a woman at the helm of a hyper-male domain, the circuitous ways in which cinema found its feet in Bombay, and the soaring happiness and tragedy of a life lived on the edge, always.

Karuna Ezara Parikh spoke about the character, Daya in her debut novel-The Heart wants pleasure first introducing the audience to her protagonist, Indian girl named Daya and her relationship with Pakistani boy Aftaab, her male friendships, sexuality and her journey through the book.

The trio made the conversation poignant by highlighting different shades of feminism and sexuality. The authors spoke on how the female characters of their books try to shatter centuries of patriarchy and embrace the natural need of fantasying, owning and accepting their sexuality without being embarrassed or ashamed of it.