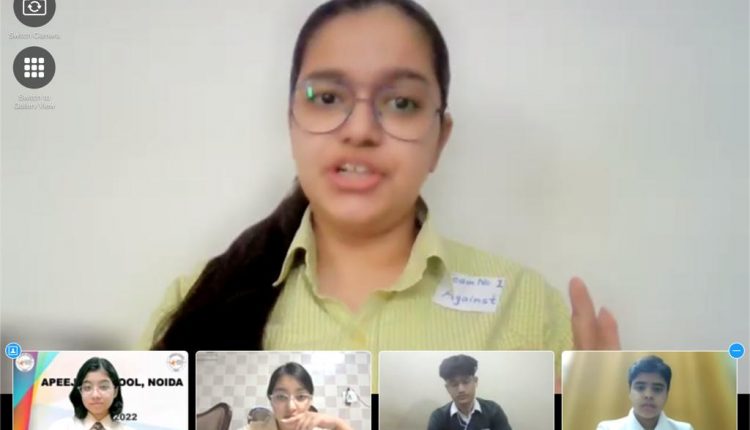 Noida : Apeejay School, Noida, recently organised the 6th edition of Dr. Stya Paul inter-school English debate and the 4th edition of Smt. Rajeshwari Paul inter-school Hindi debate competitions virtually. Participants from 15 renowned schools of Delhi–NCR, converged at this mega competition.
The topic for the English debate was ‘Building individual climate resilience is the only way to combat global warming’ whereas that for the Hindi debate was ‘The fear of strong law could bring in changes in the society.’
At the beginning of the competition, warm tribute was paid to Dr. Stya Paul and Smt. Rajeshwari Paul followed by an invocation song. Setting the tone of the occasion, Mr. A.K Sharma, Principal, Apeejay School, Noida extended a formal welcome to the judges and appreciated the relevance of the motion and emphasized the need to sensitize oneself for the sake of environment and to do something urgently to bring the change.
At the Dr. Stya Paul inter-school English debate, speakers eloquently expressed their views for and against the motion – Building individual climate resilience is the only way to combat global warming.” The judges for the occasion were Mrs. Kumkum Samaria (an educationist and renowned content creator) and Ms. Gaytri Madhura (Senior Content Project Manager with Microsoft and an Apeejay school alumnus).
The First position for Dr. Stya Paul Interschool English Debate 2021 was bagged by Adwita Rajpal (Apeejay School, Noida) The Second prize in the individual category was awarded to Shabd Chawla ( Presidium School, Noida) and the Third prize was shared by Ishmeet Kaur (Somerville School, Noida) and Kalpak Mohapatra (Apeejay School, Saket). The prestigious, Rolling Trophy for Best Team was lifted by Step By Step School, Noida. The Vote of Thanks was proposed by Ms. Surabhi Gupta, Head of the Department, English.

For the fourth edition of the Smt. Rajeshwari Paul inter-school Hindi debate 2021, the motion for the house was “Fear of strong law can bring in changes in society” With 30 participants, the debate was a power packed show as the participants shared their views very enthusiastically.
The judges invited for Hindi debate were Dr. Meenakshi Sukumaran, a well-known face in the field of freelance writing in Hindi & recipient of more than 150 awards and Ms. Shweta Rashmi working in CNN NEWS18 as an entertainment anchor. The judges appreciated the oratory skills of the participants.
Anoushka Saxena, Apeejay School, Noida bagged First place as the best speaker. Second position went to Pulak Sharma, J.B.M. Global School, Noida. Third position was won by Suhani Gupta, Sarla Chopra DAV School, Noida. Besides, Sarla DAV School was considered as the best team.
For both the competitions, the judges commended the research and passion shown by participants in putting forth their arguments. They appreciated the nuanced and matured understanding of the orators.