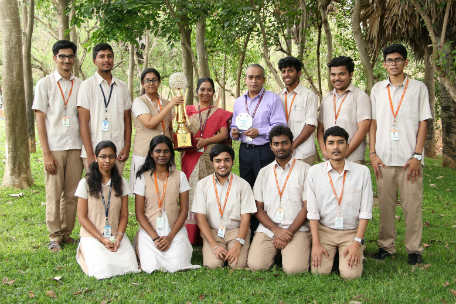 Coimbatore: Three apps and technology solutions developed by the B. Tech students of Amrita Vishwa Vidyapeetham in response to the challenges posed by several ministries have won top awards at Smart India Hackathon (SIH) 2018 organized by the Govt. of India. While two of these solutions – related to the Ministry of Defence and Ministry of Commerce & Industry, respectively – bagged the top Awards and cash prizes of Rs one lakh each, the third for the AYUSH Ministry got a special award in the Students’ Innovation category.

The annual event, considered the largest hackathon in the world lasting a gruelling 36 hours, allows various departments of central and state governments to engage with over one lakh technical students from different universities across India, and challenge them to build digital solutions to improve their efficiency and plug revenue leakages.

While three teams of six students each from Amrita Vishwa Vidyapeetham won awards at the event, three others featured in the top 10 teams in India for various ministries.

Said Dr. Sasangan Ramanathan, Dean-Engineering, Amrita Vishwa Vidyapeetham: “I am really proud of our students’ achievements at the national stage. This is a true reflection of the character of Amrita, where we believe in our students and nurture and encourage them to pursue their passion. The winners’ list this year spans from first to third year students, sending a strong message to everyone – Believe in us (the youth) and we (the youth) will take India to greater heights.”

App for the Ministry of Commerce & Industry

The Andorid app Niryatak, developed by Amrita Vishwa Vidyapeetham’s team of second-year B.Tech students for Indian exporters and manufacturers, won the top prize in response to a challenge posed by the Ministry of Commerce & Industry, Govt. of India. The app helps calculate the correct post-production cost of any product being exported and suggests what the selling price should be for optimum profit. The app has features such as a live in-built map to show optimum routes for transport of goods to the nearest port and the latest currency exchange rates.

RICE UNIVERSITY: System is designed to run around the clock…

Says Sakthisree V, a member of the team: “The app provides various cost indicators and calculates the best-estimated export price of a product for optimum profit. Insights from the data generated by the app will allow the Government to take better policy decisions. We intend to integrate data analytics into the app to provide a precise and reliable analysis of the world export market and offer a social platform for exporters to network with each other. We hope to truly make it something that would benefit Indian exporters, traders, and manufactures by helping them take better exports decisions. The app will be made available free on Google Play Store for the first two years.”

Security solution for the Ministry of Defence

Another team of six third-year B.Tech students from Amrita Vishwa Vidyapeetham – which named itself Cyber Sena – won the top award at Smart India Hackathon 2018 by developing a secure system for the Ministry of Defence. The solution enables easy transfer of data from one network to another through white-listing of pen drives.

Said Shree Varshini G, a member of the team: “Our solution was aimed at securing external USB devices and preventing unauthorized access to the data copied on them. It is independent of the operating system and equipped with the latest, highly secure encryption algorithms. In case of any tampering or damage to the device, a backup of the data remains in the local authorized systems for retrieval. In case the USB drive is accessed from any unauthorised system, its functionality is immediately ceased and the data secured. This application for white listing of USB devices can be used on Internet as well as intranet.”

App for Ministry of AYUSH

Yet another team from Amrita Vishwa Vidyapeetham won the special award in the Students’ Innovation Category for developing an app for the Ministry of AYUSH for conversions of Ayurveda unit.

Three more teams from Amrita featured in the top 10 teams in India for various ministries.

SIH 2018 was a gruelling 36-hour hackathon held at 28 centres all over India, with over 100,000 students divided into 12,000 teams participating. About 340 problem statements were provided by 28 union ministries and 18 state governments and the top 5 percent teams were selected for the grand finale in 28 centres across India. It is expected that over 100 innovations and apps from the SIH 2018 edition will be put into deployment by the Governments.

RICE UNIVERSITY: System is designed to run around the clock using only solar energy

iednewsdesk Apr 16, 2021
A new study has shown that underweight and overweight women are at a significantly higher risk of experiencing…

UNIVERSITY of WISCONSIN–MADISON: Questions sought for Division of the…