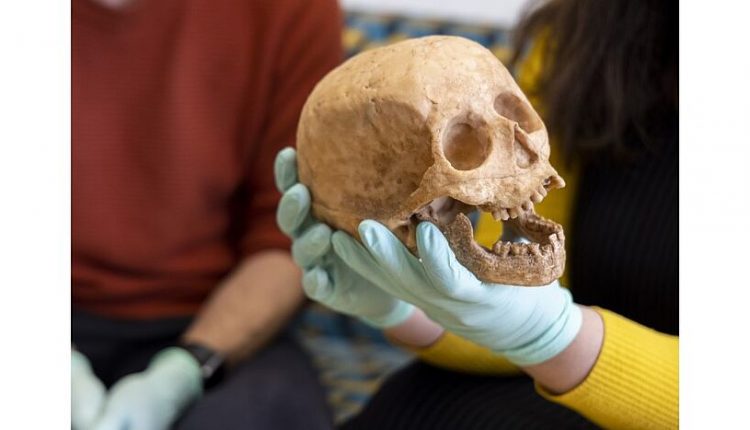 Archaeological Science as Game-Changer: What ancient genes tell us about who we are

Using the latest scientific methods, Tom Higham and Katerina Douka from the University of Vienna want to solve a great mystery of human evolution: Why are we the only humans left? Higham and Douka were the first ones to find a first-generation offspring of two different types of human. They continuously publish new results in high impact journals, most recently in Science Advances.

Our ancient cousins are more present in modern human DNA than we thought: Modern humans possess a small proportion of genes from archaic groups like Neanderthals. Every person having a European or Asian background has an average of two percent of Neanderthal DNA in their blood. For persons having an African background, this number is smaller. This explains not only some genetic dispositions in modern humans, it is also proof that different human species had contact more than 40,000 years ago.

Homo sapiens: the only species left out of eight or more?

Examining ancient fragments of bone and teeth is the daily business of molecular archaeologists Tom Higham and Katerina Douka. The two have worked together with others for the last 15 years to understand more about what happened in the crucial Palaeolithic period, or Old Stone Age. It is likely that there were at least eight different species of humans on Earth (perhaps even more) between 150,000-30,000 years ago – and they sometimes exchanged genetic material through inter-breeding. “Today is a very unusual time in terms of human evolution”. Tom Higham explains, “For several million years, we shared the planet with different groups of hominins related to us and now it is just us, as well as our great ape cousins”.

Discovery of an ancient human hybrid

A tiny bone that Katerina and Tom analysed from Denisova Cave in Siberia is probably one of their most important discoveries for research on early human history. Katerina Douka explains, “There were fierce debates between groups of researchers over the question of whether different species may have met. Other scientists did not believe that the species did coexist or even met one another.” This situation profoundly changed in 2010 with the publication of the Neanderthal genome, which showed that living people shared some of their DNA. Humans had indeed interbred with Neanderthals.

But how common was this? It seems to have happened more regularly than we thought. “In 2015, we found a tiny human bone fragment using a revolutionary collagen fingerprinting method called ZooMS. Ancient mitochondrial DNA from the bone initially assigned it to a Neanderthal. After fully sequencing it, however, we discovered that it belonged to an estimated 13-year-old girl whose mother was Neanderthal, but whose father was Denisovan. This was the first time anyone has ever found a so-called ‘F1 hybrid’, a first-generation offspring of two different types of human”, explains Katerina Douka.

Scientific breakthrough with state of the art methods

“Before 2010, such analyses were not possible because the methods did not exist then. We can now take a few milligrams of powder from tiny archaeological bone fragments and identify the bones to species, thereby finding potential human bone fragments hiding, like this little Denisovan bone. It is quite incredible how methods of examining human remains have improved so dramatically”, describes Tom Higham enthusiastically. “The last 20 years have seen an explosion of the methods we can apply to answer key archaeological questions”.

Pic. 1: A surge in scientific methods over the last 20 years, in fields as diverse as chemistry, physics, artificial intelligence and even medical technology, has revolutionised archaeological research. It is possible to extract DNA from tiny fragments and sequence them, to precisely date human fossil remains and to extract a multitude of information about past diets and lifeways. (©feelimage – matern)

Pic. 2: A key scientific breakthrough came with the discovery of this tiny bone. It belonged to a 13-year-old girl whose mother was Denisovan and whose father was a Neanderthal. This has strongly shown that different human species mated with each other and produced offspring when they had the opportunity.

Pic. 3: “Evolution is like a river of DNA that we can follow back through history and in which we find crosses and links between people”, says Tom Higham while sitting next to Katerina. She is inspecting the teeth of a human skull.

RMIT: RMIT leads as one of the nation’s top LGBTQ+ inclusive workplaces