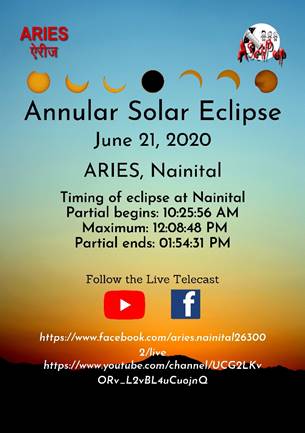 New Delhi: An annular solar eclipse will be observed on June 21, 2020, from the northern parts of India, starting from 10:25 am. In this context, Aryabhatta Research Institute of Observational Sciences (ARIES), Nainital, an autonomous institute of the Department of Science & Technology (DST), Govt. of India has organised a special lecture on ‘The Science of Solar Eclipses’ by Prof. Dipankar Banerjee, Director of ARIES on 19th June 2020 at 03:30 pm and live telecast of the solar eclipse has been arranged via Zoom, YouTube and Facebook.

A solar eclipse occurs when the moon (at the new moon phase) blocks the solar disk partially or completely, leading to a partial, annular, and total solar eclipse, respectively. During the eclipse, the shadow of the moon falls on Earth and constitutes a darker region known as umbra and relatively less dark region, penumbra. Total solar eclipses are the rarest of the solar eclipses. Even though we have a new moon every month, we do not witness eclipses so often. This is due to the fact that the orbit of the moon is inclined at an angle of around 5˚ with respect to the Earth-Sun plane. This leads to the alignment of the Sun, Moon, and Earth as a rare astronomical phenomenon.

“Astronomical events such as eclipse are exceptional opportunities to excite and instruct the youth and indeed the society at large about science and to instill scientific temper,” said Professor Ashutosh Sharma, Secretary, DST.

ARIES has specified a list of things to do and those to avoid during the observation of the eclipse:

1. Use eclipse glasses (ISO certified) or camera with proper filters attached to watch the eclipse and avoid any damage to the eyes.

2. Projection on screen using a pinhole camera or telescope is the safest way to watch an annular solar eclipse.

3. It is ok to eat, drink, take bath, go out during the eclipse. Eclipse are the spectacular treat to visualize.

1. Do not observe the Sun directly by the naked eye.

2. Do not use X-ray films or normal sunglasses (even with UV protection) to view the eclipse.

3. Do not use painted glass to see the eclipse.

4. Do not miss this eclipse.

Recent Delhi-NCR tremors do not signal of a big event, though a strong earthquake cannot be ruled out: WIHG