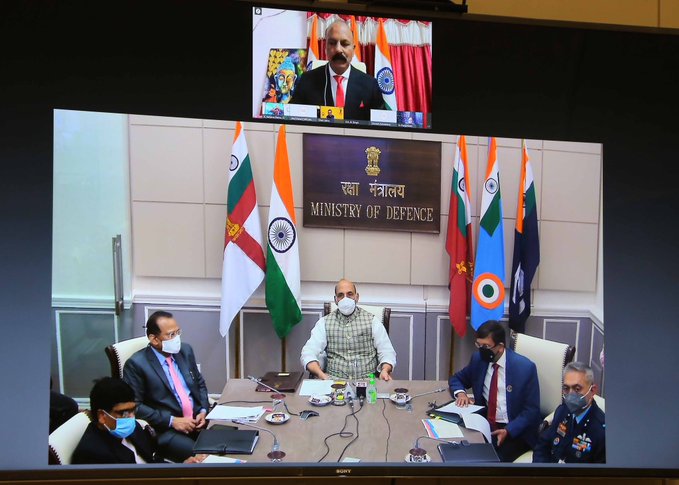 New Delhi: The second edition of the Armed Forces Flag Day CSR Conclave was organised as a webinar on 04 December 2020 in New Delhi. While presiding over the webinar Raksha Mantri, Shri Rajnath Singh said the government has recognized the role and importance of private sector in the development of the country. Since 2014, when the NDA came into power, the government has encouraged the private sector to grow. Raksha Mantri said the Defence sector which was out of bound for the private sector, is now open to welcome the Indian private sector also. He said some revolutionary steps have been taken to encourage private sector participation in the defence sector and urged the industries to come forward to take due advantage.

Raksha Mantri said in the process of fighting to safe guard the sovereignty of the country our forces sometimes even lay down their lives, or are rendered disabled. “Hence the rehabilitation and welfare of our Ex Servicemen, the next of kin of our martyrs and our disabled soldiers is the responsibility of all citizens” Raksha Mantri said. “The Flag Day provides us an opportunity to fulfill this responsibility by contributing to the AFFD fund” he added. Recalling the spirit of the services of our ex-servicemen, ESM, Raksha Mantri said even during the difficult days of Covid-19 pandemic, they assisted the local administration in works like contact tracing, community surveillance and quarantine management etc.

Raksha Mantri said during the last few years, with the generous contribution of Indian industry through CSR, there has been a substantial increase in the AFFDF. He thanked the industry for their contributions to the AFFD Fund last year and appealed them to continue contributing to this noble cause.

Secretary, Department of Ex Servicemen Welfare, Shri Ravikant said Kendriya Sainik Board (KSB) is committed to the welfare of the ex-servicemen and their dependents. Secretary, KSB Air Commodore B Ahluwalia, apprised the conclave of the welfare schemes funded out of the Armed Forces Flag Day Fund. KSB is the apex body of the Government of India, which formulates policies for rehabilitation and welfare of ex-servicemen and their dependents. The AFFDF is administratively controlled by KSB

AFFD fund is used for the rehabilitation and welfare of next of kin of those soldiers who laid their lives in the line of duty, or were rendered disabled, old, non-pensioners, widows and orphaned children. They are given financial assistance through various schemes like penury grant, education grant, widow/daughter marriage grant etc.

Sixty Nine Percent of Indian Consumers are Frustrated with…

Presently, there are more than 32 lakh ESM and around six lakh widows around 60,000 ESM are added every year due to early superannuation.

Corporate contributions to AFFDF are eligible for fulfilling the CSR obligation under section 135 of Companies Act, 2013 as it adheres to “Measures for the benefit of Armed Forces Veterans, War Widows and their dependents” (Clause VI of Schedule VII of the Companies Act, 2013).

Armed Forces Flag Day will be observed all over the country on 07th December 2020 like previous years. Since 1949, the day is observed to honour the martyrs as well as men and women in uniform, who valiantly fight on our borders to safeguard the country’s honour.

Ed-tech start-up Geekster aims at upskilling over 1,000 aspirants in next two…

iednewsdesk Jan 27, 2022
Scientists of the Ural Federal University with colleagues from the Ural Research Institute of Metrology - a…