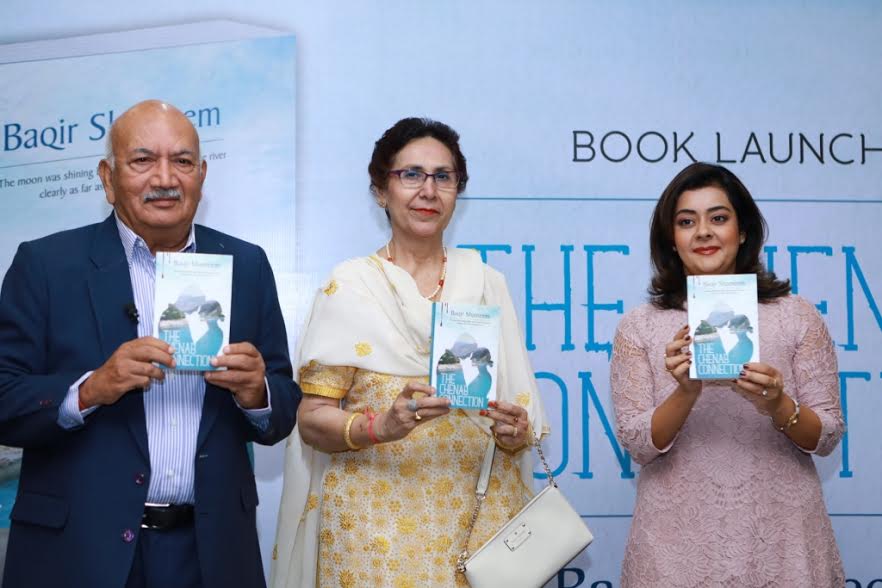 Baqir Shameem’s ‘The Chenab Connection’ explores the possibilities of an Indian boy and a Pakistani girl falling in love, under the looming shadow of hatred that has grown stronger in the subcontinent.

New Delhi: Baqir Shameem, a retired Brigadier from the Indian Army, released his book ‘The Chenab Connection’, a fascinating love story that traverse between India and Pakistan, in presence of a packed audience at an event held at the India International Centre, New Delhi,last evening .

Brigadier Shameem has served in the Indian Army for over three decades and witnessed the growing Indo-Pak conflict from close quarters. Speaking at the book release, Brigadier Shameem said, “After I completed my fourth book, my daughter-in-law Pooja asked me to write a love story. I thought if it had to be love, why not base it on regional folklore? Two folklores that immediately came to my mind are Sohni-Mahiwal and Heer-Ranjha. Coincidently, both these folklores are “from the Chenab region.”

The Chenab Connection is a fictional love story about an Indian boy and a Pakistani girl falling in love and managing to settle down, having a family, under the looming shadow of hatred that has grown stronger over the last seven decades. It looks at the crisis and its nuances through the eyes of people who are in love; because sometimes all it takes is love to conquer all. In the case of Ravi, love makes him cross one of the most hostile borders in the world to be one with Shaheen. Then there is Simran, and Omar, who fall in love under different circumstances and survive difficult situations to find happiness.

Vice President calls upon parents and educators to impart a…

The book was launched by Brigadier Shameem’s wife, Nilofar. The book release was followed by a conversation with the author and senior journalist, Tina Sharma Tiwari on the topic “Can Chenab connect the hearts and minds of the people like it connects the land?”

Over the course of an engaging and candid discussion, Tina Sharma Tiwari said that, “I have been reading this book over a past couple of days and it is absolutely fascinating because at the center there is a love story but there is so much intrigue around it and the author has obviously drawn from his wealth of experience, talking about the army on both sides, the intelligence agencies; all of that gets woven into the plot and that’s very interesting.”

The protagonist of the story, Ravi is a man in love and he is willing to do anything to be with his beloved, Shaheen. In his case, the roadblock is not just they are from two different communities; Shaheen stays in Pakistan, whereas Ravi is from Delhi. They had met as children when their families lived in Bahrain as neighbours. But life is often a difficult road and they get separated, as circumstances force Shaheen to return to her homeland, and Ravi settles down in Delhi.

The book therefore is as much a love story as much as it is a look at the divisive politics that has plagued the subcontinent for decades, where terror and subversion have become second nature for hawks who find more comfort in conflict than in peace and harmony. The characters that that are imbibed in Ravi and Shaheen, are the reality of many people in India and Pakistan.

People across the literature and defense fraternity, including author’s batch mates and senior army fellows, attended the launch. Rama Pandey, veteran TV journalist, theatre personality and the founder of RATNAV Foundation, said, “Reading the book, for the first time I realised that an Army man feels the same way a common man does. Everyone wants peace between the two nations and that can only be achieved through love, not war.” The event ended with the author signing copies of his book for the ecstatic audience.

‘The Chenab Connection’ is the author’s fifth novel. He has previously written four books on different subjects, including ‘The Final Option’, ‘The Simmering Sands’, ‘The Slender Trail’, and ‘The Wishbone’.

Imperial College Full-Time MBA redesigned to focus on flexibility and…