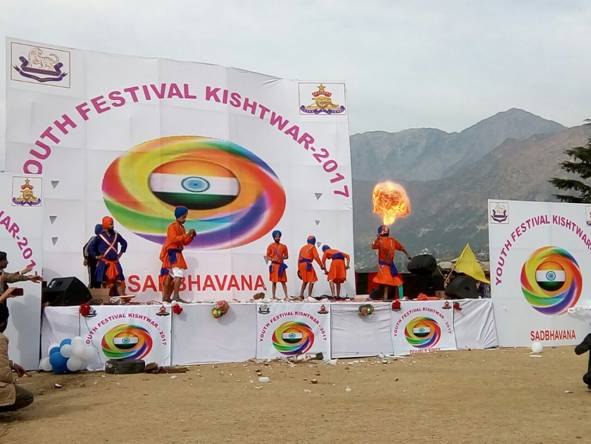 The Fest was an amalgamation of varied programmes highlighting the rich culture of different regions of India and stalls of food, entertainment and games for people of all the age groups to rejoice & cherish. The event also encompassed display of various ethnic specialities from across the country.

Students from various schools of Kishtwar district & professional artists from other parts of the country participated in the event to showcase their talent and performed folk dances of Rajasthani, Punjabi & Kashmiri culture. Kalbeliya, Gatka, Bhangra and an electrifying performance by the rock band were the highlights of the day. Stalls manifesting the talent of ITI and paintings, clay models were praiseworthy and the preponderant performance of the local youth of Kishtwar was highly commendable. Over 8000 people from all sections of society witnessed the event.

The event was graced by officials of Army, civil administration, Police, CAPF and other civil dignitaries. The youth & spectators quoted that the fest was an enlightening & enriching experience that has surely changed their perspective towards contributing to a peaceful & harmonious tomorrow.

Speaking on the occasion, the GOC, Delta Force expressed his gratitude to civil administration & local populace for their whole hearted support and enthusiastic participation in making the event a grand success. He emphasized that close coordination between civil administration and Army will take Chenab Valley towards meaningful progressive growth. The overwhelming response of youth in such events will send the message of peace & unity in the region, he added.