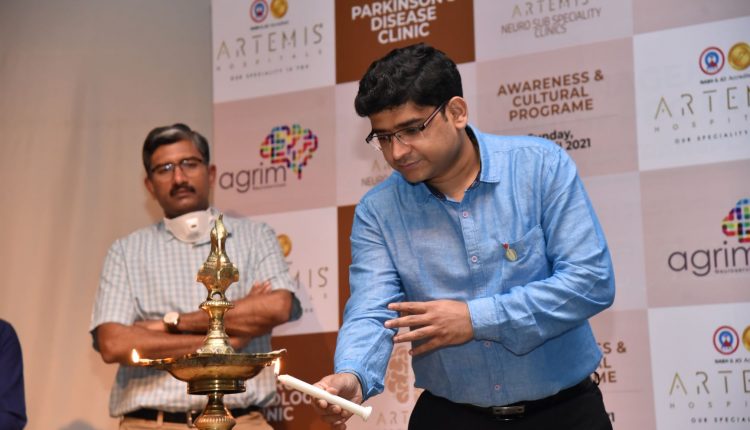 The team of expert doctors apprised people about the disease, its symptoms, medical treatment, and the available option of surgery for Parkinson’s disease. The interactive sessions were quite insightful and increased awareness amongst people. It also threw light on the diet maintenance and the care required in Parkinson’s disease. A painting & poster-making activity was also organized with the theme of ‘My Journey with Parkinson’s Disease’ showcasing the journey of patients battling with the disease.

Parkinson’s disease is one of the most common neurological disorders amongst the elderly age group. It usually develops and advances with ageing though in some of the rare cases; it has been witnessed among children and teenagers as well. Parkinson’s disease symptoms vary from person to person and early signs go unnoticed.

Speaking on the symptoms of the disease, Dr. Manish Mahajan, Sr. Consultant Neurology & head of Neuroimmunology, Artemis Hospitals said “Parkinson is a disease of the nervous system and its symptoms develops gradually. At times, people take them as simple signs of ageing like mild tremors, slow walking, difficulty in movement, speaking softly, and stiffness in joints. People with Parkinson’s disease also face little or no facial expressions. It usually develops on one side of the body with only a tremor in hand and gradually progresses with the difficulty in movement and stiffness in the limb.”

Researchers have found that genetic mutations can also be one of the causes of Parkinson’s disease. However, it has very rare chances except there is a history of many Parkinson’s patients in the family. It has also been found that males are more prone to fall for neuro disorders as compared to females.

Sharing details on the treatment, Dr. Sumit Singh, Chief-Neurology, Parkinson’s Specialist & co-Chief, Stroke Unit, Artemis Hospitals said “The timely diagnosis and taking complete treatment of Parkinson’s disease is very important as the proper course of medications helps in improving the symptoms significantly. The treatment of Parkinson’s disease includes medication and surgery along with the lifestyle modifications though it varies based on the patient’s symptoms.”

In some severe cases, if a person’s condition doesn’t improve with medications, then surgery is also considered and advised.

Sharing views on the advanced technology of surgery available, Dr. Aditya Gupta, Chief-Neurosurgery & CNS Radiosurgery & Co-Chief, Cyberknife Centre, Artemis Hospitals said “DBS (Deep Brain Stimulation) surgery plays a significant role in the treatment of severe cases. This can also be considered for people with early-onset Parkinson’s disease. In this surgery, a small device is placed inside the patient’s chest which sends electrical pulses to the brain. Further to this, it helps to stimulate the patient’s motor functions. After the surgery, there would be a moderate requirement of the medication.

Artemis Hospitals has recently launched one-of-its-kind Neuro Sub Speciality Clinics for patients suffering from neurological disorders and one of these Neuro Sub Speciality clinics is Parkinson’s disease Clinic (Movement Disorder). Such a dedicated clinic ensures a patient-centric system committed to the special needs of the patients suffering from Parkinson’s disease with early diagnosis and advanced treatment facilities.

Vestige augments its immunity portfolio with the launch of ‘Zeta Premium Spice Tea’ packed with health and taste.