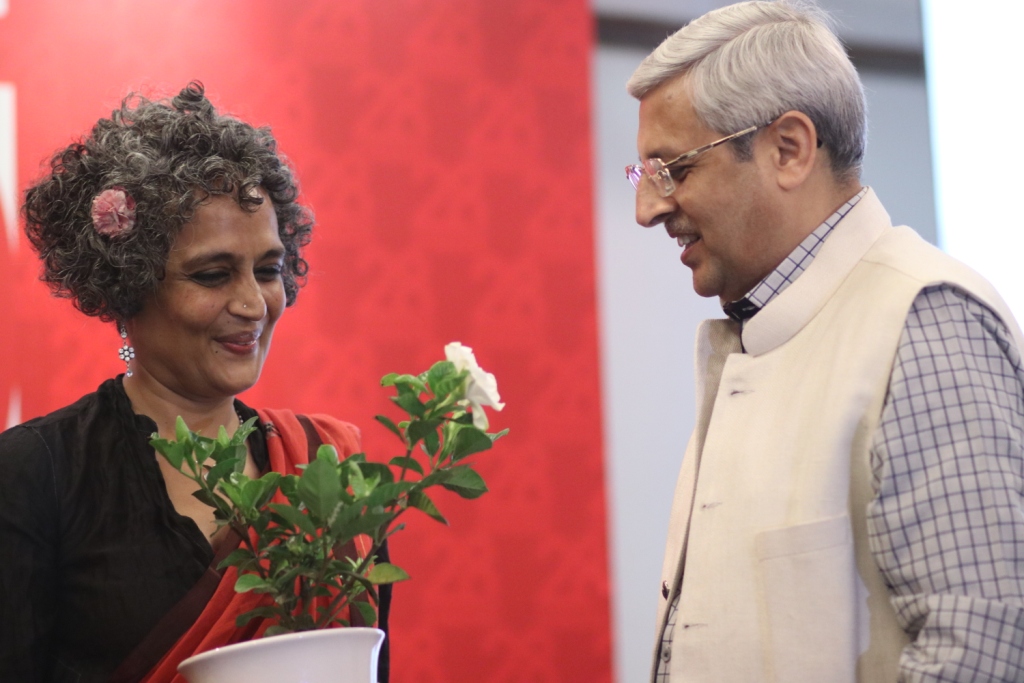 Arundhati Roy comes out of hibernation to speak about her ‘truth’.

· Rajkamal Prakashan to publish books in Bhojpuri, Maithili and Urdu.

New Delhi.RajkamalPrakashanSamuh celebrated its 69th Foundation Day on 28th February, 2018, in a unique manner: A no-holds-barred conversation between Arundhati Roy,(best known for the 1997 Booker award-winning novel The God of Small Things) and professor and translator Alok Rai on Waqt Ki Aahat at Silver Oak, India Habitat Centre in New Delhi, had the gathering listen in rapt attention.

RajkamalPrakashanSamuh, which has published five translations of her books in Hindi so far, and will also be publishing the Hindi and Urdu translations of her latest book The Ministry of Utmost Happiness, has laid out grand plans to usher in the 70th year of its successful establishment.

Rai, who prepared the ground for Arundhuti Roy, introduced the session and spoke about the works that Roy has been doing ever since her first novel The God of Small Things became hugely successful. Roy, who has never shied away from speaking her mind, was her forthright best too, and spoke candidly about issues that are close to her heart. Rai explained how The Ministry of Utmost Happiness is different from her first book. “It’s because of the changing voices in the changing times that propel a writer in her to break away from her earlier voice and transform her narrative voice. Hence we have named our session ‘Waqt ki Aawaz,” he said.

Roy, who started her address in Hindi, made it clear that she is most comfortable writing and speaking in English. “I will reduce the sophistication of what I want to say if I speak in Hindi,” she said. “I was never the writer that who thought that after the success of my first book, let me write another one and then another one because to me experimentation is everything. Also, twenty years of writing other stuff (essays) deepened my engagement with the world I live in. While my first book is about a family, although dysfunctional, it does give you the comfort of a family. In this book it’s the reverse… it’s about people whose hearts are broken, homeless but not in the literal sense. Eventually it’s about broken people who bring their little shards of broken hearts.” She elucidated how the structure of a story is as important as the story itself, and described how she creates a universe in her book and is ready to walk her readers through it. “It’s not a book that you can consume in 10 minutes and rush to others to tell them about it…you might lose yourself and learn to deal with yourself.”

In the same breath, she added that she never defends what she writes. Her comment, “When you write, you should write like a suicide bomber,” was received with a thunderous applause.

Roy also said that she never defends her novel but argue the hell about her essays. About her fiction, she said, “there are truths that only fiction can tell and fiction is truth in a way that musical note is true… here you are dealing with feeling. The claim to truth cannot be made by the writer but must be felt by the reader.”

On the occasion, Ashok Maheshwari, MD, RajkamalPrakashanSamuh, remembered the Founder Publisher Om Prakashji “who, with his far-sightedness and professional approach, was solely responsible for making Rajkamal a pioneering establishment in the world of Hindi publishing. It was his efforts that made Rajkamal such a respected name that it continues to be so popular even among the non-Hindi publishing. We all continue to get inspired by his vision and believe that his path breaking endeavours are a still a challenge for us.”

On this occasion he also remember Sheela Sandhu, who has been a great pillar of Rajkamal Prakashan.

He also shared how proud they are on five of their authors in Bangla, Marathi, Gujarati and Hindi have won the Gyanpeeth Awrads in the past five years consecutively.

Mr. Ashok Maheshwari has announced two new awards also. One will be given to a individual publisher for their work in Indian language and Second for best book Seller.

On its part, RajkamalPrakashan announced new plans, commenting on this Editorial Director, RajkamalPrakashanSamuh, Satyanand Nirupam said, “A new editorial board has been announce for ‘Aalochna’, a flagship journal of Rajkamal. Now Ashutosh Kumar and Sanjeev Kumar will be the editor of it. The history of Rajkamal is underway and Mr. Mohan Gupt has been commissioned to write the History of Rajkamal. We would also be publishing in Bhojpuri, Maithili and Urdu this year. Rajkamal Prakashan will co-published some major translation with eminent English publisher, Speaking Tiger. A new series on ‘Pratinidhi Shayeri’ will be added to the flagship series of Rajkamal ‘Pratinidhi Kahaniyan’ and ‘Pratinidhi Kavitayen’.”

On this occasion ‘Pathak Mitr Samman’ has been given to Rajkamal’s efficient employee Mr. Upendra Jha and Mr. Mukesh Kumar for their extraordinary performance.

The one hour session was also followed by a question and answer round in which the audience asked Roy some tough questions.