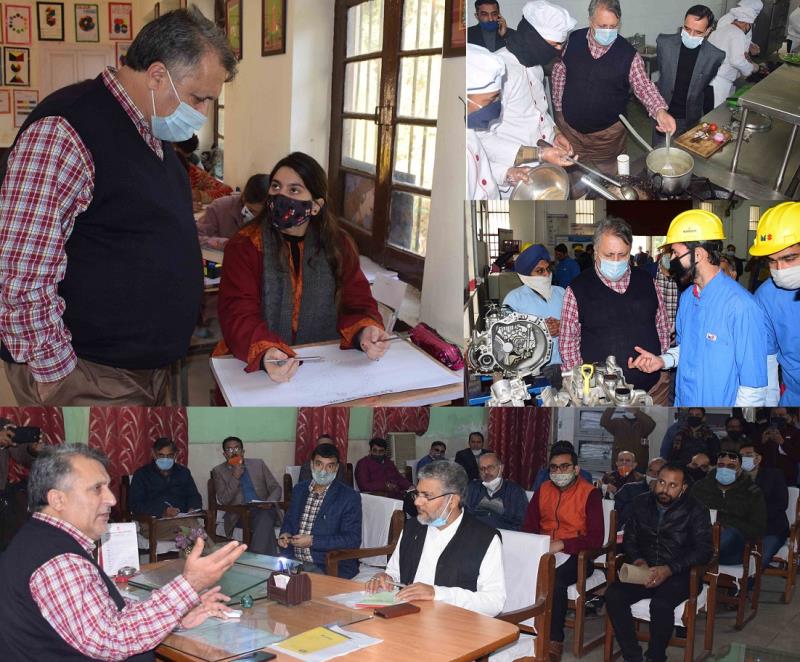 During the visit, Samoon had an exhaustive round of the complex and interacted with the faculty and students in various departments of the institute like Food Production, Front Office, Food and Beverage Service.

Principal Secretary witnessed a Power Point presentation highlighting the working and achievements of the Institute. He was informed that over the years about 70-80 per cent trainees have been placed in various hotels and restaurant across the country and abroad as well. Besides, some of the trainees have also set up their own ventures like restaurant, bakery outlet, home takeaways etc and are doing well in their respective fields.

Principal of the Institute, Jyoti Bhatti informed that the students at present are doing diploma courses (1½ year courses) in various trades of Hotel Management like Food Production, Front Office and F&B Service. Besides, the students undergo one year practical and theoretical training in the Institute and then go to various hotels for On The Job training/internship programme wherein they showcase their talent and learn the basics of the actual working of the hotel, she added. She added that Food Craft Institute Jammu has tied up with various chain of hotels across the country where about 60-70% of the trainees get absorbed in the respective hotels where they undergo six month training.

Apart from regular one and half year diploma courses, FCI Jammu is also conducting Short Term Skill Development Programmes, free of cost, which are all aimed at eradicating unemployment. The students trained in these short term programmes for about 3-4 months are being helped by the Institute for their placement in the hospitality sector in various satellite centres like Banihal, Reasi, Bhaderwah, Kupwara.

At present, the Institute has tied up with the army who are facilitating the conduct of trainings in Kupwara for creating better employment opportunities for the unemployment youth of the area.

While reviewing development works being executed in the Institute, Principal Secretary took serious notice of slow pace of progress on some of the ongoing works and asked the concerned for expediting the same.

Later, Asgar Samoon also visited Govt. Industrial Training Institute, Jammu were he interacted with trainees / staff members to get a first hand view of the different trades functioning in the ITI premises.