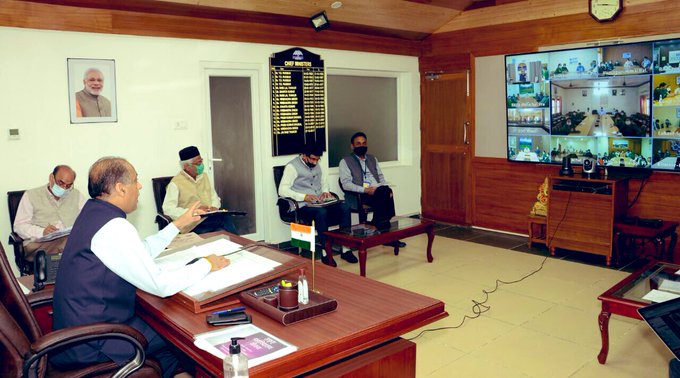 Shimla: The State Government has decided to provide an incentive of Rs. two thousand per month for the month of June and July to all the ASHA Workers of the State. This was stated by the Chief Minister Jai Ram Thakur while addressing the ASHA workers of the State through Video Conferencing from Shimla today.

He said that the Corona pandemic has took the whole world by surprise and caught the medical fraternity unprepared. He said that Himachal Pradesh has effectively fought this virus and ASHA workers of the State have played a pivotal role in controlling this virus. He said that ASHA workers not only helped in detecting the people with ILI symptoms, but also helped in motivating the people in strictly following the quarantine norms.

The Chief Minister said that the Active Case Finding Campaign launched by the State Government was even appreciated by Prime Minister Narendra Modi. He said that the Prime Minister has even suggested the chief ministers of other states to follow Himachal Pradesh and launch this campaign in their respective States to detect patients with influenza like illness. He said that not only this, the ASHA Workers also were playing a vital role in educating the masses regarding importance of social distancing and use of face masks to prevent spread of this virus.

Jai Ram Thakur said that although the COVID-19 cases in our country were increasing, but still the situation was under control. He said that as many as 4.65 lakh deaths have been reported in fifteen most severely affected countries of the world with a total population of 142 crore, whereas in India with a population of 135 crore, as any as 13,699 deaths have been reported till date. He said that credit of this goes to the timely decision of lockdown taken by Prime Minister Narendra Modi.

He said that the ASHA workers also played an important role in sensitizing the people in home quarantine to strictly follow the norms so as to ensure that they and their family members remain safe.

He also interacted with the ASHA workers on the occasion.

Additional Chief Secretary Health R.D.Dhiman said that the ASHA workers have played a major role in containing the Corona pandemic in the State. He said that the Active Case Finding Campaign launched by the State Government has been appreciated by the Prime Minister also.