New Delhi: Actress Kangana Ranaut’s statement about Nathuram Godse has been described by well-known writer Ashok Kumar Pandey as tampering with the facts of history. He said that the actress is trying to convert an infamous killer into a hero.

Ashok, the author of ‘Usne Gandhi ko Kyon Mara’, said, “Kangana has been struggling for some time to prove herself a spokesperson of the right-wing. Zero understanding of history, unlimited hunger for publicity, and lack of any responsibility is turning her into a celebrity who is willing to do anything for cheap publicity.”

Ashok said, “As an artist and now filmmaker, self-promotion is her right but when she is openly tampering with the facts of history and trying to convert a killer like Nathuram Godse into a hero, it becomes necessary to be answered.”

He added, “Just like Afzal Guru or Beant Singh, Godse is a killer punished by the law of our country. Going beyond the narrow definitions of patriot and traitor, the glorification of such killers is an insult to our courts and our constitution. What kind of patriotism is it that teaches disrespect to the Constitution and the courts?

Ashok said that he would be sending a copy of his book Usne Gandhi ko Kyon Mara to the actress so that she may have access to the real facts related to the assassination of Mahatma Gandhi.

It is worth mentioning that Ashok’s response is in response to her statement on Twitter on 30th January, the day of the martyrdom of Mahatma Gandhi. 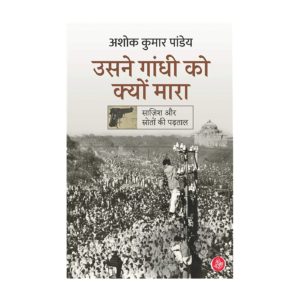 Queen of Jhansi and devotion for Godse!

Ashok says, Kangana portrays herself as ‘Rani Jhansi’ after her role in a film. Now it would be hard to expect her to be aware of the fact that Rani used to treat Ali Bahadur, the Nawab of Banda as a brother and used to tie him a rakhi, and not only she had a Muslim bodyguard and head of artillery, there were a large number of Muslims in her army, but every Indian is aware of the fact that this brave queen of Jhansi fought against the British. Amazingly, Kangana tries to glorify Godse who never fought against the British and chose to kill Mahatma Gandhi in a cowardly conspiracy!

The truth of school books and history

Ashok said that when you don’t have an argument then you are free to say anything. He said Kangana has said about Godse that every story has three aspects, yours, mine, and truth. She talks about school books and blamed them to be dishonest towards Godse. She must be asked that from where did she came to know about revolutionaries like Rani of Jhansi, Tatya Tope, Subhash Chandra Bose, Bhagat Singh, Chandrashekhar Azad, and others? Their name and their valor are also recorded in the same school books which contain accounts of Mahatma Gandhi. Then what is this third aspect of Kangana? Where does her ‘Truth’ come from? May be from the so-called Whatsapp university, which is hell-bent to spell lies to suit Right Wing politics and creating an army of shenanigans like her.

Underlining facts, he said, “Godse’s history is of publishing a communal newspaper Agrani, which not only criticized Gandhi and Nehru but spread similar venom against freedom fighters like Patel, Subhash, Ambedkar, and others who are often praised by Kangana and her right-wing followers.”

Apart from this, his contribution was to support and finance communal riots which resulted in the partition of the country and finally he succeeded in assassinating Gandhi. This ‘hero’ of Kangana and her supporters were such great patriots that their blood did not boil at all when the British executed Bhagat Singh or inspired them enough to join the Indian National Army of Subhash Chandra Bose. Surprisingly, they readily followed the suit when their mentor Savarkar called for the recruitment in British Army. His brother and co-conspirator Gopal Godse and Narain Apte enlisted themselves in British Army during Second World War.

He reiterated that statement of Kangana about Godse is only a cheap way of gaining cheap popularity for which she is insulting the freedom struggle of the country. Today, she may gain some popularity with such antics, but this will tarnish her name forever in history.