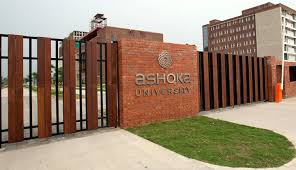 New Delhi : Ashoka University conferred degrees on 1125 graduating students of the 2020 and 2021 batches at a joint virtual convocation ceremony. The students were conferred degrees on completion of their undergraduate studies, Ashoka Scholars Programme (ASP), and Master of Arts programme in Economics and English.

In his address, Nobel Laureate Professor Eric Maskin, said “It is a notable accomplishment, even at the best of times, to graduate from a university. But to work, study, and complete all the requirements of a degree amidst a worldwide pandemic — a pandemic that continues to take a terrible toll on your country — is truly an extraordinary accomplishment.”

“India will be facing other challenges that may be even more difficult to solve than the pandemic. One of them is increasing income inequality. There has been massive globalization as a result of declining transport costs, falling trade tariffs, and decreasing communication costs. People who support globalization predicted globalization would bring prosperity to emerging economies and on that count they have been right. In India, for example, GDP per capita has grown a lot since 2000. However, according to its supporters, globalization was also supposed to reduce income inequality. Yet, in many such countries, wage inequality has actually increased. Therefore, while globalization has done a very good job in increasing overall prosperity in emerging economies, a more fruitful route would be to try and raise the skill levels of the least advantaged workers and this could be done through job training or education,” Professor Maskin said.

“Inequality cannot be solved by market forces alone. The government can provide public education and thereby develop general skills. Government could also subsidize the employers that train their workers”, he added.

Eric Maskin is the Adams University Professor and Professor of Economics and Mathematics at Harvard. He has made contributions to game theory, contract theory, social choice theory, political economy, and other areas of economics. He received his A.B. and Ph.D from Harvard and was a postdoctoral fellow at Jesus College, Cambridge University.

Chancellor Rudrangshu Mukherjee congratulated the graduating students and said, “A convocation is always an occasion for joy. In spite of the travails that we are all enduring, the students would have experienced the benefits of Ashoka’s liberal education. One important lesson a liberal education imparts is to think about a better future and to imbibe hope in our lives. This lesson is particularly important for this graduating batch since the pandemic has taught us the power of hope and the power of compassion. I sincerely hope that whatever the students have learned at Ashoka will enable them in the future to fashion their lives and reshape society by taking responsibility for their beliefs and actions.”

Speaking at the Convocation, Vice-Chancellor of Ashoka University, Professor Malabika Sarkar said, “I have every confidence that the values that the graduating students have imbibed, the intellectual curiosity that has now become their second nature, and the many areas of knowledge that the students have discovered will equip them to lead fulfilling lives.”

Speaking on Ashoka’s contribution to India’s fight against Covid, she said, “Ashoka’s scientists contributed to India’s first state-level epidemiological model and to the development of a multi-scale agent-based simulation framework to track the progress of Covid-19 in India. Additionally, many departments and Centres of the University have contributed to the understanding of Covid and of solving problems associated with Covid.”

University of Helsinki: New avenues opening up in the educational sciences for…

iednewsdesk May 16, 2022
University Researcher and Docent Hanna Posti-Ahokas works in the Global Innovation Network for Teaching and…