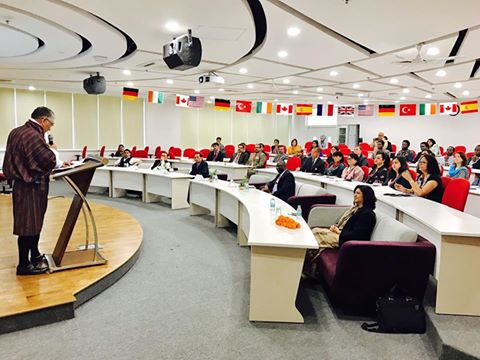 New Delhi: Ashoka University, India’s premier Liberal Arts University, hosted its first International Educators Conference 2017, on Friday, the 18th of March, 2017. In line with the University’s vision to emerge as a global institution, and put India on the world education map, the focus of the conference was on India as a global higher education destination. H.E. Major General Vetsop Namgyel, Ambassador of Bhutan and H.E. Niankoro Yeah Samake, Ambassador of Mali graced the occasion as guests of honour for the event. Mr. Dalton Sembiring, Deputy Chief in Mission and Charge d’affaires of Indonesian Embassy also graced the occasion. The event also saw participation by educators from over ten countries and diplomats from 5 embassies.

Speaking at the event, H.E. Major General Vetsop Namgyel, Ambassador of Bhutan, said, “Today, participants from 15 countries have come here because of our interest in India as an important education destination. Individually, all the countries want best education for their students. We want to create high quality schools and universities to educate students and make them responsible youth. If the government and individuals are not able to provide this in our own countries, we would like to send them abroad to study. But the cost of education of international standards in all schools and colleges abroad is very high. Hence, we come to the question of high quality education at an affordable cost which Ashoka University is promoting in India. I believe that high quality education at an affordable cost will make India a desired destination for education”. H.E. Niankoro Yeah Samake, Ambassador of Mali also spoke about the growing collaboration between India and Africa in the education sector and a major interest in African students to come to study in India, while Mr. Dalton Sembiring of Indonesia spoke about the deep relationship that Indonesia and India share in terms of culture, arts and history which makes for a natural bond between the two nations.

Aspiring to bring positive change to the higher education sector in India, Ashoka University has attracted students from international markets from the very beginning. The University at present hosts students from over fifteen countries across three batches of the Undergraduate programme. These students have come from places near and far such as- Nepal, Dhaka and Dubai to Ethiopia, Nigeria and California.

Vineet Gupta, Pro-Vice Chancellor and Founder, Ashoka University said, Vineet Gupta, Pro-Vice Chancellor and Founder, Ashoka University said, “Over the past decade, India has cemented its place as a knowledge economy. With a fast growing economy, exciting career opportunities and attractive study options, India is emerging as a preferred higher education destination at a global level. Ashoka has been a pioneer of Liberal Education in India. We believe that we deliver an education experience at par with the best in the world. We are confident that the conference will go a long way in encouraging more international students to choose India for higher studies.”

The conference saw knowledge sharing by country representatives on Opportunities and challenges in promoting India as an education destination followed by interesting sessions such as Shakespeare in Bollywood by Jonathan Gil Harris, Dean of Academic Affairs and Professor of English at Ashoka University.