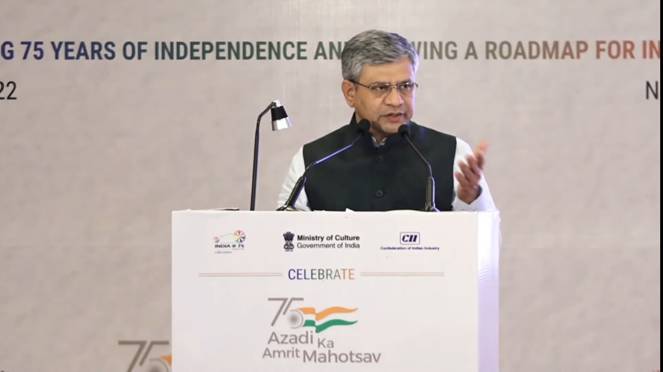 New Delhi: “People at the bottom of pyramid should be at the core of digitisation.” said Shri AshwiniVaishnaw, Minister of Railways, Communications and Electronics and Information Technology. Reiterating the Antyodaya philosophy of the government, he said that everything that we do shall aim to provide benefits, a transformative force and a better environment for the marginal sections of the society.

Addressing the session on “Leverage Digital Platforms to Build a Future-Ready India”at“Sankalp Se Siddhi”Summit here today, Shri AshiwniVaishnaw highlighted the 5 themes/pointsthat can add value to development efforts of the government and industry pertaining to digitisation. These included- Electronics and other kind of manufacturing, Lead in Semiconductor sector, Use of public digital platforms and convergence between telecom and Information Technology to reap benefits of digitisation.

Talkingabout the growth made by electronics manufacturing in last decade, Shri Vaishnaw said that electronics industry has made significant growth in last 7-10 years. It has grown to 80 billion dollar industry, employing around 25 lakh people and it’s well on its way to grow to 300 billion dollar industry in coming years. Lot of inputs have been received from industry for further increasing the growth of this industry and we are in process of implementing many of these suggestions.

Speaking on the potential of Semiconductor sector, the Electronics & IT Minister said that the sector is foundation stone for many industries including telecom, IT hardware, automobile, steel and heavy machinery etc. Our aim, he said, is to leverage our talent and build up the semiconductor industry in our country and scale it up in a consistent manner in next 10 to 15 years. He mentioned that government has undertaken some good initiatives in this regard which are also getting good response from the industry.

About the public platforms, Shri AshwiniVaishnaw mentioned that government is planning to create public digital platforms on the lines of UPI, Co-WIN and digilocker. Once created, these platforms will be opened up to start up community and industry for developing consumer centric applications. Government will also bring a National Data Framework, he said. The non-personal data of people will be used for providing better services to them.

Emphasizing the need of digitisation of large sectors like Railways, Defence and Steel etc., Shri Vaishnaw, said that the digitisation in these sectors must happen at faster pace compared to what has happened over the past and government is taking pro-active steps in this direction with involvement of industry.

Talking about the convergence of telecom/4G/5G and digital world, Shri Vaishnaw said that mobile is the primary mode of consumption of digital services. We should think on the lines of how we can accelerate this transition towards digitisation and at the same time how to make it safer given the challenge of cyber security.

The multi-stakeholder summit “Sankalp Se Siddhi” is being organized by the Confederation of Indian Industry (Cll) and India@75 Foundation jointly with the Ministry of Culture, Government of India, to commemorate India’s 75th year of Independence. Spread over two days, the Summit has convened important stakeholders to deliberate on the country’s achievements in different areas of development and the way forward.Shri Anurag Singh Thakur, Minister for Information & Broadcasting, Youth Affairs & Sports andSmtMeenakshiLekhi, Minister of State for External Affairs and Culture, also gave keynote address at the summit, besides Shri AshwiniVaishnaw.

The Sankalp Se Siddhi has brought together Government Dignitaries, Decision Makers, Policy Makers, Think Tanks, Industry Leaders, and prominent members of Civil Society on one platform to navigate a successful growth path for a new India. The objective is to celebrate India@75 and draw a roadmap for a New India by India@100 in 2047.