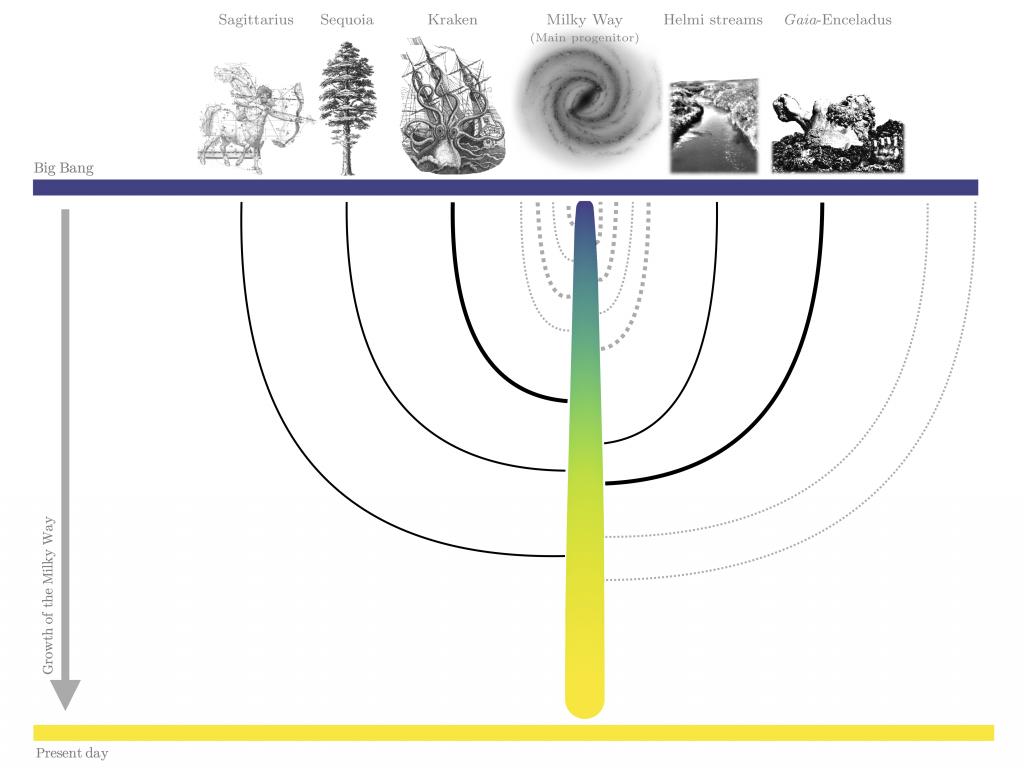 Astrophysicists Reconstruct The Galaxy Merger History Of Our Home Galaxy

New Delhi: Galaxies like the Milky Way formed by the merging of smaller progenitor galaxies. An international team of astrophysicists led by Dr Diederik Kruijssen from the Centre for Astronomy at Heidelberg University has succeeded in reconstructing the merger history of our home galaxy, creating a complete family tree. To achieve this, the researchers analysed the properties of globular clusters orbiting the Milky Way with artificial intelligence. Their investigations revealed a previously unknown galaxy collision that must have permanently altered the appearance of the Milky Way.

Globular clusters are dense groups of up to a million stars that are almost as old as the universe itself. The Milky Way hosts over 150 of such clusters. “Many of them came from smaller galaxies that later merged to form the Milky Way that we live in today,” explains Dr Kruijssen. To study the merger history, the Heidelberg researcher and his colleague Dr Joel Pfeffer of Liverpool John Moores University (United Kingdom) and their research groups developed a suite of advanced computer simulations, called E-MOSAICS. These simulations include a complete model for the formation, evolution, and destruction of globular clusters.

The German-British team used these simulations to relate the ages, chemical compositions, and orbital motions of the globular clusters to the properties of the progenitor galaxies in which they formed, more than ten billion years ago. By applying these insights to groups of globular clusters in the Milky Way, they not only determined how massive these progenitor galaxies were, but also when they merged with our home galaxy.

“The main challenge was that the merger process is extremely messy, because the orbits of the globular clusters are completely reshuffled,” explains Dr Kruijssen. “To overcome this complexity, we developed an artificial neural network and trained it on the E-MOSAICS simulations. We were astonished at how precisely the artificial intelligence allowed us to reconstruct the merger histories of the simulated galaxies, using only their globular clusters.” The researchers then applied the neural network to groups of globular clusters in the Milky Way and precisely determined the stellar masses and merger times of the progenitor galaxies. They also discovered a previously unknown collision between the Milky Way and an unknown galaxy, which the researchers named “Kraken”.

Taken together, these findings allowed the team of researchers to reconstruct the first complete family tree of our home galaxy. Over the course of its history, the Milky Way cannibalised about five galaxies with more than 100 million stars, and about ten more with at least ten million stars. The most massive progenitor galaxies collided with the Milky Way between six and eleven billion years ago. Dr Kruijssen expects that these predictions will aid the future search for the remains of the progenitor galaxies. “The debris of more than five progenitor galaxies has now been identified. With current and upcoming telescopes, it should be possible to find them all,” the Heidelberg researcher concludes.

Corona crisis does not deter students- University of Tübingen

University of Wisconsin: Metastatic prostate cancer comes in two forms, which could…

University of Warwick: Researcher on fast track thanks to dementia charity founded by…

iednewsdesk Sep 25, 2021
Dairy judging has been in Angie Ulness’s blood for more than two decades, and that isn’t likely to change anytime…

University of Warwick: Researcher on fast track thanks to dementia…