At age 18, U of T’s youngest grad has accomplished more than most – and she’s just getting started

Maddy (Xiaoxiao) Zhang knew how to read by the time she was two years old. By Grade 1, she had mastered multiplication tables.

At age 11, she visited the University of Toronto on a family trip from Beijing, fell in love with the old buildings on campus and decided she wanted to study here one day.

That day came just three years later. Zhang was the youngest student in her year when she began in 2016 and probably the youngest-ever student in engineering science, a demanding program in the Faculty of Applied Science & Engineering where students simultaneously learn Newtonian mechanics, epsilon-delta calculus proofs and human-centred engineering design.

Next week, Zhang, now 18, will obtain her undergraduate degree at an age when most students are just beginning university. After saying her good-byes to her “engineering science family” in Toronto, she’s off to the Netherlands to pursue a master’s in aerospace engineering.

“I don’t want it to be the only thing that defines me.”

To be sure, she’s no different from most other students graduating from U of T this June. Like her classmates, Zhang has ambitious plans — in her case, earning another degree and making a meaningful contribution to her chosen field: aerodynamics and sustainable aviation. At the same time, she shares that, just like anyone else, she faced unexpected setbacks and navigated periods of self-doubt, particularly in first year.

“Everyone learned a lot about engineering and also everyone probably learned more about who they are and who they want to be, and it’s the same case with me,” she says. 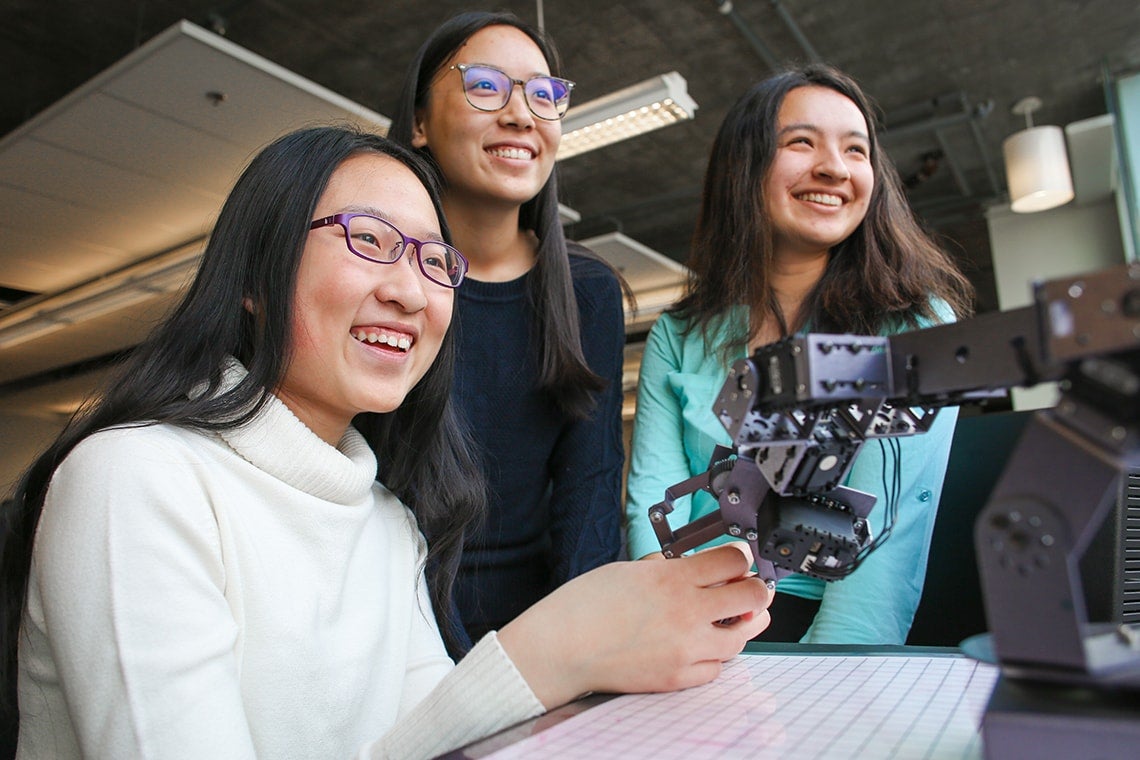 When Zhang arrived on campus, she was a shy, diminutive 14-year-old with purple glasses. But she still managed to blend in seamlessly with the other first-years.

Charlie Keil, the principal of U of T’s Innis College, was notified that a particularly young student was moving into the Innis residence, but it was only much later, during a dinner on campus for new students in residence, that he learned who that student actually was. “A student beside me, who I’d been talking to already, whispered ‘I’m the girl who’s 14’,” he recalls. “I had no idea.”

As he got to know Zhang over the years, Keil says he had formed the impression that being younger than her peers wasn’t much of a challenge for Zhang. “She possesses a preternatural amount of self-confidence and approaches things very positively,” he says.

Zhang didn’t keep her age a secret, but she didn’t bring it up unless she had to. Even still, word spread among her classmates that there was a 14-year-old in their midst. One day, in a course on structural engineering, one of her teammates on a project tried to solve the mystery by guessing other students’ ages. When Zhang told him she was the youngest student, he couldn’t believe it.

Kim Lau became friends with Zhang in first year. On the surface, they seemed an unlikely pair: a minor and a mature student who, just shy of her 30th birthday, had gone back to university after working as a dental hygienist.

Lau, who speaks Cantonese, called Zhang “mei mei” (little sister) – but Zhang joked that Lau’s intonation made it sound like she was saying “beautiful lady.”

More than her age, it was Zhang’s attitude that impressed Lau. Zhang was always game to learn new things and seemed to know a lot already. She rides a unicycle around campus. She draws for fun – and as a way to sharpen her mind and learn to focus. She’s fluent in two languages, Mandarin and English, and can get by in Norwegian.

She’s also a black belt in taekwondo and dances ballet. (She started taking martial arts and dance classes at the same time because her mom wanted her to be “elegant but tough,” according to Zhang.)

“That’s a lot of learning in one person,” Lau says.

When Zhang’s 16th birthday finally rolled around, Lau planned to make the event one Zhang would remember. After a workshop, a weary Zhang headed back to the engineering science students’ common room. When the lights flicked on she saw she was surrounded by friends and two Costco sheet cakes – one vanilla, one chocolate – set out on a long table.

“That was just so heartwarming,” Zhang recalls. “Every time I feel lonely or miss my home, I think to that moment and I know that I’m never alone because engsci are like my family, sort of. In a weird way, since I left home I feel like engsci sort of raised me.” 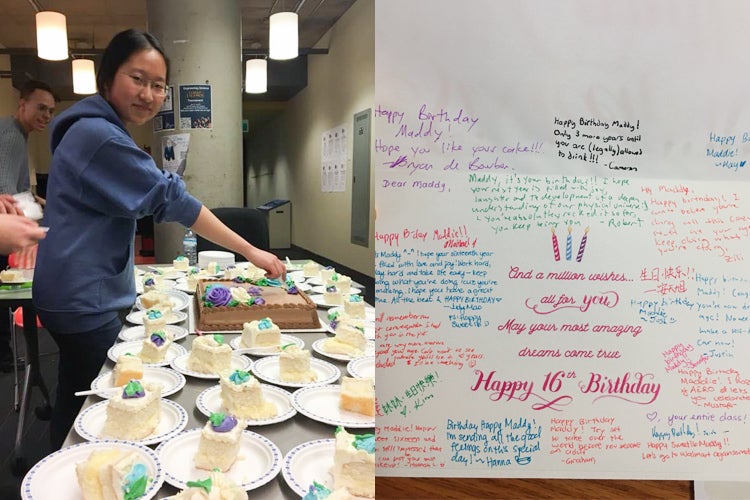 Left: Zhang cuts a cake at a surprise16th-birthday party organized by her fellow classmates. Right: handwritten messages in a birthday card (photos courtesy of Maddy Zhang)

Even for someone as bright as Zhang, university wasn’t always easy. In her first year especially, Zhang missed her parents who live outside of Canada. And she felt insecure about her grasp of programming, which she hadn’t studied before university unlike many of her classmates.

“I realized that all I needed was confidence,” she says. “When I started university there were a lot of things I needed to overcome. Some of these things were because of my age; some were not.”

Zhang could always count on her engineering science family for support – in Toronto and beyond. She made friends on the other side of the Atlantic through a programming internship at a tech startup in Norway. The thought of a 15-year-old interning at a tech company was unusual enough to land Zhang in the Norwegian news. Her boss raved about her independence, talent and impressive grasp of Norwegian after just a few short months (Zhang still practises Norwegian with Duolingo and by reading the Norwegian newspapers out loud).

She put her Norwegian to good use again last summer, when she landed a research position through U of T at a university in Trondheim. There, she worked with Associate Professor Jason Hearst, a U of T engineering science alumnus, on a project related to the physics of turbulent flows. On Zhang’s first day in the lab, Leon Li, a PhD candidate and another U of T alumnus, took her around the room making introductions, making sure to point out Zhang’s age.

“Universal shock,” he recalls. “I quickly learned not to think ‘when I was your age, I was …’ because there was just no comparison.” 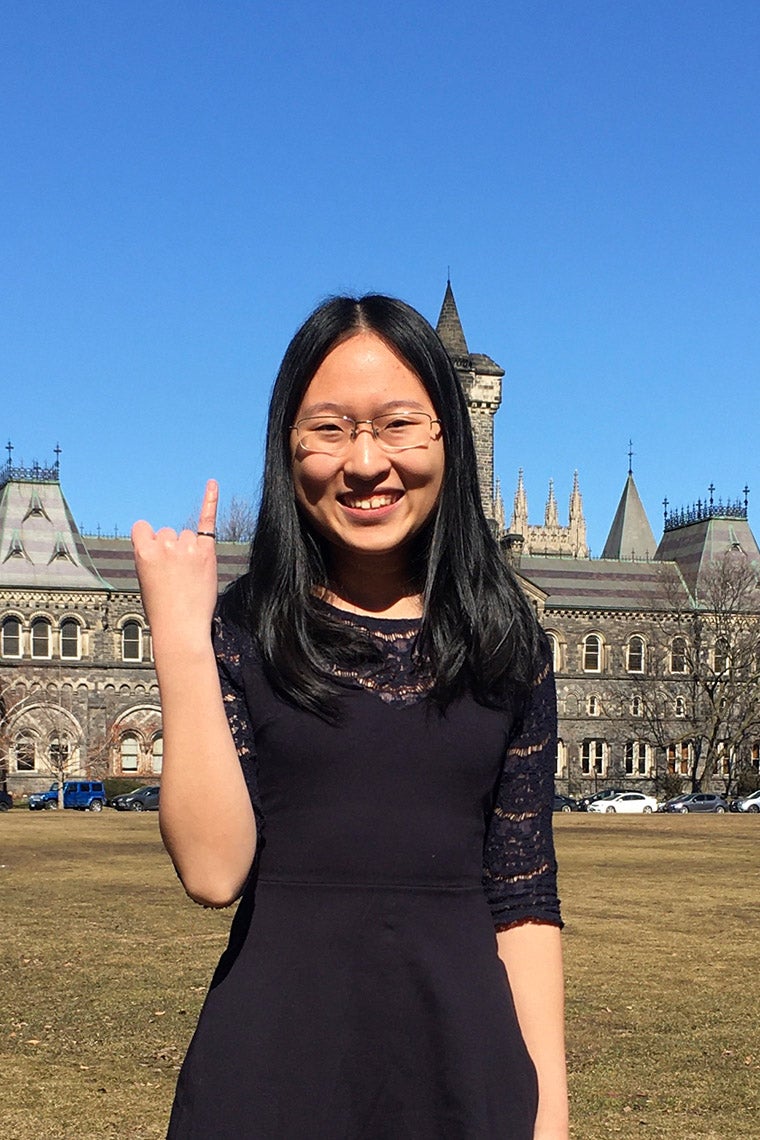 Zhang specialized in the aerospace stream of engineering science in part because it combines interesting math and physics, but also because air travel has many sustainability-related hurdles to overcome.

Her involvement in U of T’s aerospace team, which designs and builds drones, rockets and satellites, also got Zhang hooked. “Seeing a man-made thing fly is just so satisfying,” she says. “It’s like magic.”

From a sustainability point of view, “it can have a really large impact and there are so many challenging problems that still exist,” she says, citing efforts to reduce drag and noise.

She points to another sustainability-minded teenager as inspiration.

“Greta Thunberg, she’s around my age basically,” she says of the Swedish environmental activist who is just one year Zhang’s junior. “She did an amazing job being an activist … but I want to work toward the same goal in my own way –  in my engineering way.”

She pressed on toward that goal in her final year working on research with Philippe Lavoie, an associate professor and associate director of the Centre for Research in Sustainable Aviation at U of T’s Institute for Aerospace Studies, or UTIAS. The results of that research are being prepared for publication in a scientific journal.

While the COVID-19 pandemic has grounded flights around the world and raised questions about the future of air travel, Zhang is undeterred. Borrowing language from robotics, she says she’s “activated this control system.”

“When there are disturbances along the way – and COVID is like one giant disturbance – just make sure you have a goal in mind, and you can adjust your daily life around that, but still aim toward that goal.”

The next stop in her academic journey is the Delft University of Technology, where she will be pursuing a master’s degree in aerospace engineering on a full scholarship that covers tuition and living expenses.

Although Zhang says she took the “express pass” to university, she’s not afraid to slow down and take everything in.

She plans to celebrate her graduation by watching U of T’s virtual convocation event on June 2 and having a video call with her closest friends. She may also take a stroll around campus, if the sun is shining, and perhaps squeeze in a little work. One thing that’s not in the cards: celebrating with a glass of champagne. That, she says, will have to wait until she is of legal drinking age.

‘50 New Life Mantra’s – a business and personal guide by Social and Serial entrepreneur, Mr. Agnelorajesh Athaide, to be unveiled by Capt. Raghu Raman

Queen’s University Belfast collaborates with Indian Universities to introduce a…