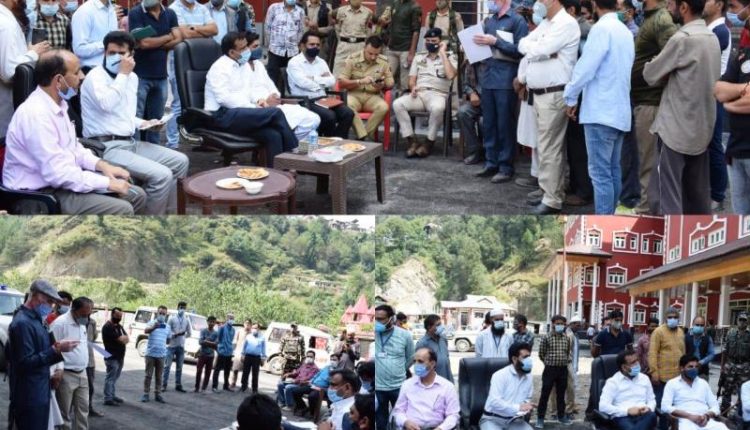 DODA : District Development Commissioner (DDC) Doda, Vikas Sharma, visited the last village of the district Kaljugasar in Gandoh Sin Division to take stock of the developmental scenario, besides to listen to the grievances of the locals.

The DDC started with inspection of finishing work of mega projects including Government Degree College Building Kilhotran and Community Health Centre Gandoh besides Oxygen Generation plant coming up in the Health Institution. The executing agencies were asked to complete the pending minor finishing works on war footing to facilitate early commissioning of the twin projects for the benefit of the public.

At both the venues the DDC administered Swachhta pledge to the staff members, Students and PRI members, besides flagged off the rally and felicitated the students of GDC Kilhotran for their excellent performance in different events organised under the aegis of Azadi ka Amrut Mahotsav.

At Dak Bungalow Changa the DDC met several deputations which included PRI and Youth Club members, DDC members and others and listened to their grievances patiently. He assured them that all their genuine demands shall be addressed by the concerned authorities on priority. He directed for early execution of Jugasar road and asked XEN PMGSY to submit its PERT chart for daily monitoring.

The DDC also directed the local administration to avail the services of the newly formed Youth Clubs of the area for the mass awareness of the schemes and coordinate with the district administration for their capacity building.

During the tour the DDC also inspected the ongoing developmental works in the area which includes construction of the roads, macadamisation etc and directed the concerned to ensure quality and transparency during the execution.

The locals also raised the demand for placement of adequate staff in CHC Gandoh, construction of Changa to Bal Padri road, Black Topping of Gandoh Jai road, besides other roads. The DDC directed the concerned to address the issues on priority basis and to submit the compliance report.