Former president joins experts, policymakers at conference co-hosted by the IOP, The Atlantic

Speaking at the University of Chicago this week, President Barack Obama reminded his audience that we cannot be complacent about the endurance of our institutions and norms. A broad, fact-based consensus, he said, requires work to preserve.

“It’s not self-executing. It’s something that we have to continually nurture, and we have to respond to new circumstances,” Obama said April 6 at UChicago’s David Rubenstein Forum.

Returning to the campus where he once taught, the former president spoke during the keynote conversation at “Disinformation and the Erosion of Democracy,” a three-day conference co-hosted by the University’s Institute of Politics and The Atlantic.

Conversations about these new circumstances—particularly how tech platforms have changed the distribution of information to the public—were held in person and live-streamed to a global audience. The event included appearances by experts and policymakers from around the world, including Obama and Nobel laureate Maria Ressa.

During his conversation with Jeffrey Goldberg, editor of The Atlantic, Obama admitted that he had underestimated the degree to which democracies were vulnerable to disinformation—including in America. “It’s very difficult to get out of the reality that is constructed for us,” he said. “It’s difficult for me to see how we win the contest of ideas, if in fact we are not able to agree on a baseline of facts that allow the marketplace of ideas to work.”

In his opening remarks, UChicago President Paul Alivisatos discussed how fitting it was that this conference was being hosted at the University, which fosters free expression and strives to create a community of ideas that preserves the fabric of how we access information and learn.

Reflecting on UChicago’s long history, Alivisatos connected what he now calls the “engaged university” to the ideals that William Rainey Harper had imagined as the University’s founding president.

“He conceived of the University as tied to the fabric of society,” Alivisatos said. “Even as we thought about the deepest and hardest problems that humanity can imagine, at the same time he cared very much about the University being an engaged partner. Today, we have many partner institutions here, and we are grappling with an issue that our global societies all must approach, and on which we have so much to learn.”

The event convened a group of experts—including policymakers, journalists and politicians—to examine the spread of disinformation and strategies to respond to it. Panelists discussed the threats posed by technological advances, the tools and policies required to neutralize them, and the tension between free expression and the need to combat organized disinformation.

Obama noted that while the current ecosystem of social media did not create the divisions in our country, it has exacerbated them and has made democracy more difficult.

“The loss of local journalism, the nationalization of grievance and anger-based journalism, the growth of social media and technology whose product design monetizes anger and resentment—all this undermines our democracy and, if combined with ethno-nationalism, misogyny or racism, can be fatal,” he said.

“Disinformation and the Erosion of Democracy” continues through April 8. Visit the Institute of Politics YouTube page to livestream the conference or watch recordings of all the panels and discussions.

Get more with UChicago News delivered to your inbox.

Photo gallery: ‘Disinformation and the Erosion of Democracy’ 1/4

Rappler CEO Maria Ressa, who shared the 2021 Nobel Peace Prize, has faced harassment and threats working as a journalist in the Philippines. “What are you willing to sacrifice for the truth?” she asked in her remarks on April 6.
Photo by John Zich

Those dangers are something Nobel Peace Prize winner Maria Ressa knows well. As a journalist and co-founder of Rappler—the digital news site that leads the fight for press freedom in the Philippines—she has endured political harassment, threats and arrests while fighting to uphold the tenets of a free society.

“What are you willing to sacrifice for the truth?” Ressa asked during the event. “Without facts, truth and trust, we have no shared space, and democracy is just a dream.”

She highlighted the way tech platforms severed journalistic content from distribution, which is powered by opaque algorithms that spread anger, lies, and moral outrage further and faster than facts. Surveillance capitalism, she said, exploits and manipulates our emotions for profit at the expense of a shared sense of reality. We think we choose what we consume, but the “blackbox of algorithmic amplification” chooses for us.

“A lie told a million times becomes a fact,” said Ressa. “If you don’t have facts, you cannot have the rule of law.”

Anne Applebaum, staff writer at The Atlantic, began her discussion with IOP Director David Axelrod by highlighting the way disinformation has always been with us, and how technology has made the work of would-be demagogues easier.

“In the 1980s, when the Soviet Union wanted to create disinformation, they built a case over several years. Now they can do exactly the same thing, except it takes 10 minutes,” said Applebaum, a winner of the Pulitzer Prize. “This is the dark side of globalization. We all now live in the same information market.” 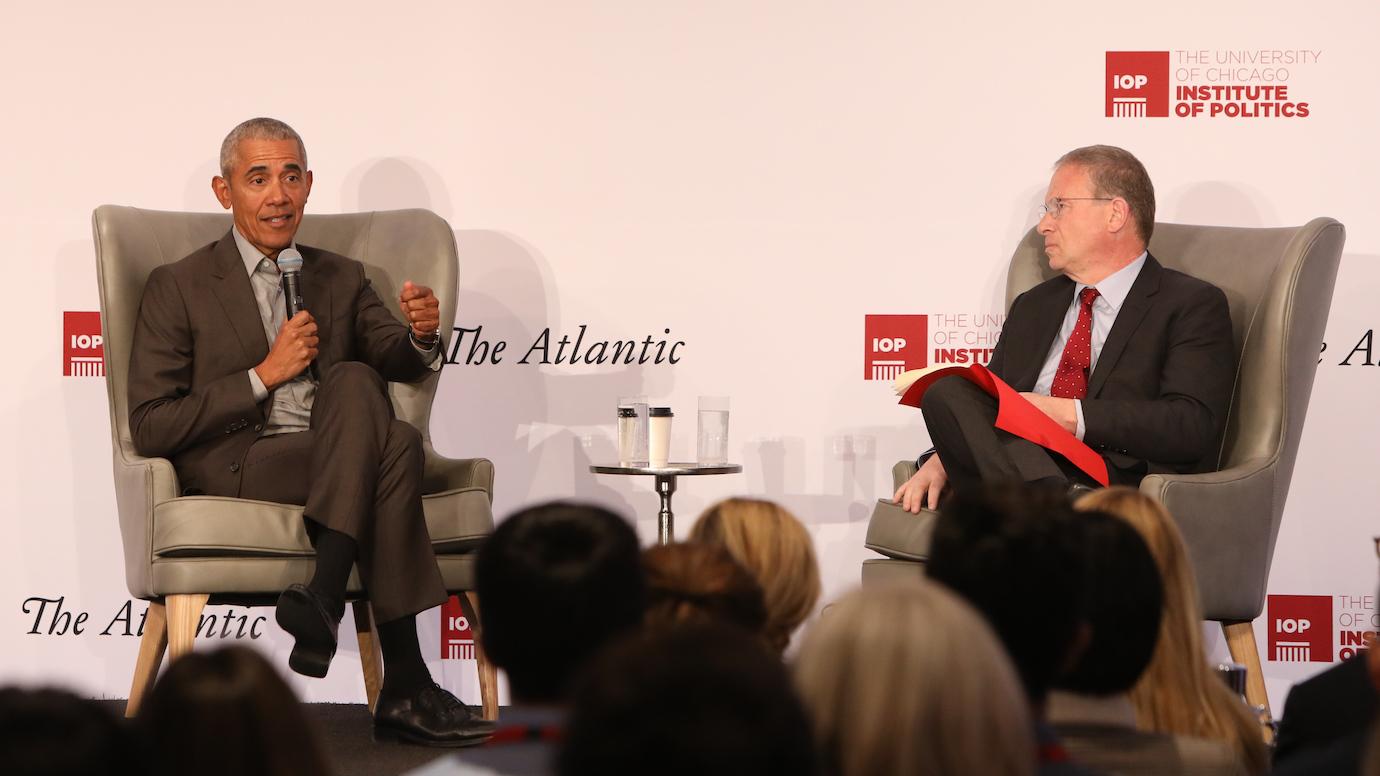 68:50
“I think we underestimate the degree of pliability of our opinions and views, and I take that as hopeful,” Barack Obama said in his conversation with Jeffrey Goldberg. The former president cited a recent study that demonstrated how easy it is to shift people’s views on issues by changing their media diet. (Video courtesy of the Institute of Politics and The Atlantic)

Like Obama, Applebaum was surprised by how susceptible America has been to spread of disinformation—echoing what she had studied in Eastern Europe. “As the 2016 election unfolded, I watched, my jaw dropping, as I saw Russian slogans that I knew had originated in Russian media, appearing in the U.S. election campaign,” she said.

She examined the allure of conspiracy theories, which serve as stories that connect mysterious things together—providing a veneer of understanding that fact-checkers often cannot offer in a complicated world.

“Fact-checking doesn’t work because you have to trust the fact-checker,” Applebaum said. “How do you create communities of trust for people?”

During his conversation, Obama cited a recent study that demonstrated how easy it is to shift people’s views on issues by changing their media diet. “I think we underestimate the degree of pliability of our opinions and views, and I take that as hopeful,” he said.

Figuring out how to adapt traditional institutions that previously taught people how to debate and engage in the public sphere to virtual platforms is a necessary task, for which he feels the help of younger generations will be crucial.

“You can either encourage the better angels of folks’ nature, or their worst,” Obama said, “Democracy is premised on the idea that we can come up with processes—including how we share and argue about information—that encourages our better angels.”

Journalist Marjorie Miller is Elected Administrator of the Pulitzer Prizes