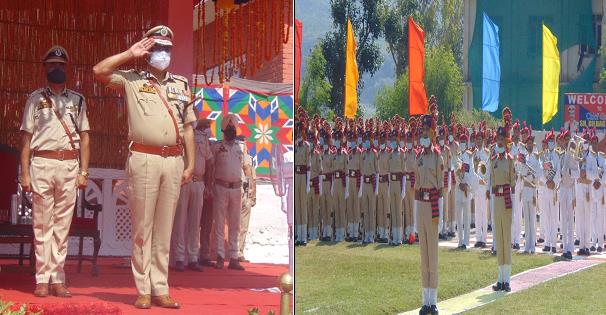 Director General of Jammu and Kashmir Police, Dilbag Singh was the chief guest on the occasion.

Among the trainees, 63 were recruited through Transparent Recruitment Policy, 489 are SPOs who’s work remained outstanding on anti Militancy front, 3 have been converted from Follower to Constable and 49 personnel were recruited under SRO-43.

The trainees underwent meticulous training and passed out with flying colors to serve the Jammu and Kashmir Police. Besides this, trainees were also familiarized with crucial modern techniques.

In his address, Director General of Police J&K, Dilbag Singh heartwarmingly welcomed the newly inducted members in J&K Police. The DGP also appreciated work and conduct of all the trainees and appreciated the determination of the Institute for imparting quality Training since its inception in 1998. The Director General also expressed his deep condolence to the families of martyrs of Jammu and Kashmir Police force who laid down their lives for the protection of the Nation.

Earlier, in his welcome address, Principal STC Talwara, Anil Kumar Katoch, expressed his best wishes to all the new members of the Police force who passed out in this batch.

India Education Diary Bureau Admin Jan 20, 2022
Biologists from the Nature Conservation Foundation and the Wildlife Institute of India have published the first…