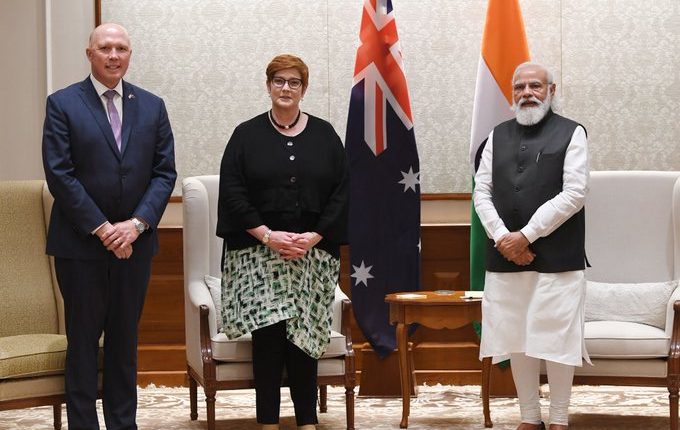 New Delhi: Australian Minister for Foreign Affairs and Women, Her Excellency Marise Payne, and Minister for Defence, His Excellency Peter Dutton, paid a courtesy-call on Prime Minister Shri Narendra Modi today, soon after the conclusion of the first Ministerial-level 2+2 Dialogue between India and Australia.

Prime Minister expressed his appreciation to the Australian dignitaries for the productive discussions during the 2+2 Dialogue, pointing out that this was a sign of growing strategic convergence between both countries.

A number of issues were discussed during the meeting, including possibilities of further expanding bilateral strategic and economic cooperation, the common approach of both countries towards the Indo-Pacific region, and the growing importance of the Indian community in Australia as a human-bridge between both sides.

Prime Minister conveyed his appreciation for the role that Prime Minister Scott Morrison, has played, in rapidly advancing the Comprehensive Strategic Partnership instituted between both countries last year. He renewed his invitation to Prime Minister Morrison to visit India at his earliest convenience.

SPbPU: A delegation from the Embassy and Consulate of the Republic of Ecuador…

University of Helsinki: Collective agreement of universities is…

Griffith University: Teens at risk from a lack of education and…

University of Western Australia: Young people at high risk of being…