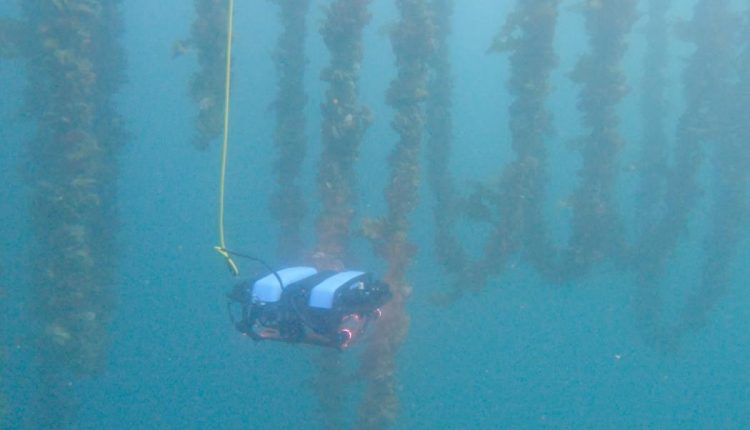 #Earth&Ocean An autonomous underwater drone that could revolutionise the mussel and scallop industry has been developed by University of Canterbury researchers.

The drone, or autonomous underwater vehicle (AUV), can survey mussels and scallops so accurately that their size, health, and any pests can all be detected, eliminating hours of costly and time-consuming manual work, says research lead Professor Richard Green.

Easily operated by novices, the AUV can also remotely inspect the condition of underwater structures such as wharf pylons and be used in salmon farming to scan nets for holes.

“The big thing about the autonomous drones is that they reduce cost and overcome labour shortages so that even more accurate information can be easily and quickly gathered to help crucial decision making, whether that’s stock health or checking for any invasive marine pests,” Professor Green says.

“We think this is the first New Zealand developed autonomous underwater drone. It means we’re leading the world in getting so close to underwater surfaces.

The research team has worked closely with Cawthron Institute (on mussel-based and other projects) and NIWA (on scallop-based projects).

Canada announces next phase of strategy responding to…

Businesses can now apply to the Regional Quantum Initiative…

“Our autonomous artificial intelligence (AI) approach is unique, and we believe our drone could be widely used not only here but internationally. Our collective expertise means we‘re able to rapidly develop prototypes and novel applications.”

“Similarly, by using a robot arm, the drone can harvest only the correctly sized scallops, leaving behind a healthy stock and healthy seabed. Current drag-net harvesting of scallops completely devastates the seabed ecology.”

The underwater drone can also quickly scan entire wharf pylons, and ship hulls in the future, to accurately identify invasive marine organisms growing on them. At the moment, these annual inspections are done manually by divers – a dangerous, expensive and time-consuming task.

Although there is extensive R&D into autonomous agriculture robots and aerial drones, he says the underwater marine environment is much more hostile and challenging, including pressure, visibility, communications, navigation, and positioning (no GPS).