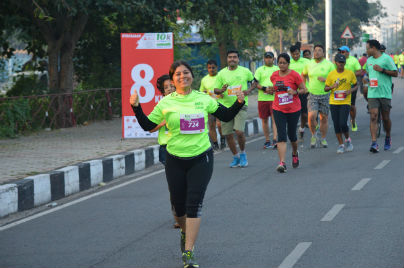 Hyderabad: Army’s men dominated proceedings during the inaugural run of the 10K INTENCITY Run – Hyderabad leg as their lads swept the awards bagging the top three honours with Avinash Sable finishing with impressive timings of 29:54 minutes.
Held at the picturesque Hussain Sagar lake on Sunday morning amidst pleasant weather which helped runners of the 10 kilometre run to pace it up. Shankar Swami and Mohit Chandra Kumar finished second and third respectively. Amrish Kumar, coach of the armymen said he was pleased with the performance which was held in front of a host of dignitaries. Among the women, V. Priyanka crossed the line first followed by Jacqueline Xavier and Kruti Kadakia.
Promoting a Green, Healthy India, the 10K INTENCITY Run – Hyderabad leg witnessed cyclists as pilots from the Hyderabad Cyclist Group for all the three categories 10km, 5km (Fun Run) and 2km (Future Champions Run).
Among the honoured dignitaries who were present were Shri.Jayesh Ranjan, Principal Secretary, Industries, Commerce, Information Technology, Government of Telangana, Ram Singh Yadav, former Olympian and marathoner, JJ Shobha, Olympian, Kalpana Reddy & Shankar, International athletes, Ramesh Nagapuri, Dronacharya Awardee.
Pullela Gopichand, Event brand ambassador, said that he was pleased with the response from his home city. “I am really thankful for the support for this event and the cause of charity which Anand Menezes is supporting. It will help the sportspersons in a very big way to promote sports in the country.”
This event has received official recognition from the Athletics Federation of India. The 10KINTENCITY run which started from Pune and will now move to Chennai. The winners for 10K INTENCITY Run received Rs 35,000, 25,000 and 15,000 as prize money.
The 10K INTENCITY Run Hyderabad leg was supported by the Telangana Police, the Greater Hyderabad Municipal Corporation and Hyderabad Metropolitan Development Authority.
Speaking on the occasion, Mr. Anand Menezes, Ex-Olympian, Founder & Director, Andy Event Management said, “We are extremely grateful for the support and enthusiasm shown by the citizens of Hyderabad who participated in the run. The Hyderabad 10K INTENCITY Run was a proof of the success of the concept of a circuit run which we have taken to different parts of India. We are positive to build on the success of Hyderabad and will be moving to Chennai from here,” said Anand Menezes. The total runners who participated across the three categories was over 3000.
With Sunday’s Run, the 10KINTENCITY Run has completed three legs Pune, Indore and Hyderabad. The run will now move to Chennai on November 12, 2017 to be followed by Bhubaneshwar, Bengaluru, Mumbai, Baroda, Delhi and will culminate on February 11, 2018 in Goa. The total prize money for the winners of the 10K INTENCITY Run across cities is Rs. 50 lacs.
Results: 10K Men’s Winner – Avinash Sable (1st 29:54 mins), Shankar Swami (2nd 30:49 mins), Mohit Chandra Singh (3rd 30:52 mins). 10K Women Winners: V Priyanka (1st 45:08 mins), Jacqueline Xavier (2nd 52:43 mins), Kruti Kadakia (3rd 54:21).

University of Western Australia: Space Boot Camp to blast off at UWA

Ural Federal University: University Is in the Top Three for Patents…

Ural Federal University: University Scientists Will Create an App to…