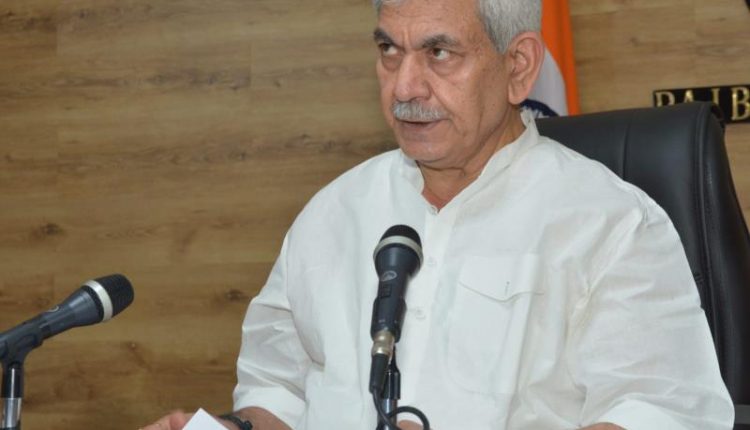 Administration has taken concrete steps on suggestions received from the listeners to meet the needs of community and making the system accountable to public, says the LG

· Jammu’s Sandhya Dhar, Nasira Akhtar of Kulgam, and Dr Nasheeman Ashraf of Srinagar who have emerged as the new age icons for the Women of J&K find special mention during the 12th edition of the radio program

JAMMU, MARCH 20: Lieutenant Governor Manoj Sinha expressed his gratitude to all the citizens for their valuable contributions in participatory development process to fulfill the aspirations of every section of society.

Through Awaam Ki Awaaz, which is being aired on all local & primary channels of All India Radio (AIR) in the UT, and broadcast on DD Kashir, we have received numerous suggestions for reforms in Health, Education, Rural-Urban development, Cultural Rejuvenation and Balanced Regional Development etc.

The administration has taken concrete steps on suggestions received from the listeners to meet the needs of community and making the system accountable to public. I also thank Jammu and Kashmir All India Radio and Doordarshan for their continuous support, added the Lt Governor.

During this month’s episode, the Lt Governor made special mention of Sandhya Dhar from Jammu, Nasira Akhtar of Kulgam and Dr Nasheeman Ashraf of Srinagar who have emerged as the new age icons for the women in Jammu and Kashmir. Their achievements give a vision to the women who aspire to inspire, the Lt Governor said.

Referring to the suggestions of Shradha Sharma from RS Pura Jammu and Anantnag’s Zakir Hussain Bhat on empowering women entrepreneurs in agriculture sector, and ensuring participation of women in all sectors, the Lt Governor underlined the need to implement dedicated measures for women empowerment.

When women are financially prosperous, their direct and indirect benefits will reach the family, society, nation and the entire humanity. In the last two years, Jammu and Kashmir administration has launched several campaigns to provide more livelihood opportunities to women folks. In order to increase the participation of women entrepreneurs in agriculture and village industries, about 5 lakh women have been added under the Umeed program. Various programs like KrishiSakhi and PashuSakhi have been initiated so that more and more women come forward in agriculture, horticulture, and dairy sector, the Lt Governor added.

Welcoming the suggestions received from Sajjad Noorabadi from Kulgam highlighting the need for awareness campaign about welfare schemes of the government, the Lt Governor said that the main objective of the Block Diwas program organized every Wednesday is to take the administration to the doorsteps of people. It is our best effort that in addition to the immediate redressal of the problems of the common citizens, the people shall be informed about the various government schemes, he added.

While mentioning about the insight received from Dr. Shilpi Sharma and Dr. Ankur Bhat from Jammu regarding detailed roadmap for the Digitization of Healthcare, the Lt Governor underscored various reforms introduced by the government to provide advanced healthcare to the people. He also mentioned about a pilot project in SKIMS for online appointment, which will be soon extended to other hospitals as well.

In the last month, keeping in mind the expansion of digital services in Jammu and Kashmir, we have taken several important decisions. Under the Prime Minister’s Digital Health Mission, we are aiming to create an online appointment facility, besides digitizing medical records of the patients. Online appointment in all Hospitals &Digitisation of Health Services to be taken up in mission mode, added the Lt Governor.

On suggestions of Gazi Ahmad Pandit from Pulwama and Rahul Kumar from Samba pertaining to the welfare of senior citizens, the Lt Governor said that a National Action Plan was approved in April 2020 under the leadership of Hon’ble Prime Minister Shri Narendra Modi to provide opportunity to Senior Citizens to live life with dignity.

After August 5, 2019, Prime Minister Shri Narendra Modi has also implemented the Maintenance and Welfare of Parents and Senior Citizens Act in Jammu and Kashmir which, despite having been passed by the Parliament, was not been implemented in Jammu and Kashmir for almost 12 years. Last year, we have provided pension to a total of nine lakh people including the poor and senior citizens under various schemes. I also assure every support by the government to voluntary organizations working for the welfare of senior citizens, added the Lt Governor.

Er. Abdul Rashid Bhat from Ganderbal wrote a letter regarding creation of an Environment, Cultural and Archaeological Research Centre (ECARC) in J&K that will engage with youth.

The Lt Governor also highlighted the transformation taking place on the ground as a result of good administrative practices.

The ambitious plan to develop Budgam’s Kanihama village, famous for its Kani shawls, into a Craft Tourism Village is now in its final stages. Also, the scheme to provide affordable accommodation at Doodhpathri that was pending for many years have been completed.

The Lt Governor also praised district administration Bandipora for innovative digital intervention to track developments in Panchayats. The district has taken the lead in starting Panchayat Development Index, which ranks each panchayat on the basis of their performance.

The farmers of Qamarwari, Srinagar have witnessed manifold increase in their income after creation of market linkages. The district administration is also setting up a Farmer Produce Organization in Tengpora Block to promote vegetable farming, said the Lt Governor.

Every district must replicate the good practices of other districts and make concerted efforts to bring about a positive change in the lives of people, added the Lt Governor.

Group of 15 Students flagged off for Bharat Darshan Tour…