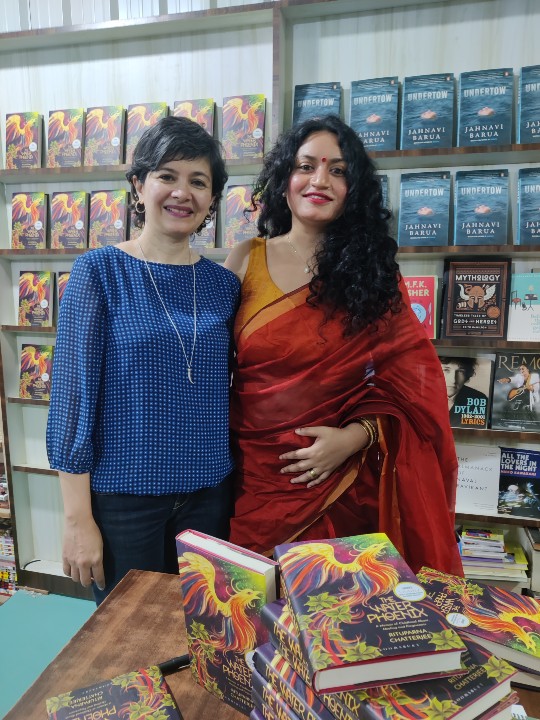 Bangalore:  On Sunday evening, book lovers and readers braved Bangalore’s weekend traffic and crowds in Bangalore’s downtown to come to The Bookworm at Church Street. It was the launch of The Water Phoenix, an award-winning magical realism memoir by the author and columnist Rituparna Chatterjee and published by Bloomsbury. The event was part of a national book tour and after Delhi and Mumbai, this was the Bangalore launch.  Bangalore’s local author Jahanavi Barua was in conversation with Rituparna Chatterjee.

The Water Phoenix won the United Nations Population Fund (UNPF) Laadli Award for best book. The Laadli award focuses on gender representation across media and previous winners include Sridevi (for English Vinglish and Amitabh Bachchan). The Water Phoenix was also in the top five bestselling nonfiction of the year with Obama’s book A Promised Land.  The Times of India had called Chatterjee “courage personified”

The Water Phoenix is a magical realism memoir of an abused child’s discovery of is love and what isn’t and finally coming home to herself. Local author Jahanvi Barua said, “This may be a dark book but it is also about the joys and innocence of childhood. I kept laughing. Once I finish it, I felt light and joyous.” The audience full of readers, students, writers and book club enthusiasts had many questions especially around the magical realism form, which has never been done before for nonfiction. After the launch, readers queued up as the author signed copies for them.

The author Rituparna Chatterjee is a former foreign correspondent and columnist for The Economic Times. She lived in and covered Silicon Valley for over a decade.

Her column California Dreaming was about her life as an immigrant mother in America, its gun violence and shooter drills for kindergarteners. She is now a columnist at The Times of India, writing about her life between Silicon Valley and India.  Her first book An Ordinary Life (Penguin/Viking, 2017) was on the life of the Emmy Award-nominated actor Nawazuddin Siddiqui. The Water Phoenix is Chatterjee’s second book. She is now writing a novel.

Jahanvi Barua who interviewed Chatterjee at Bookworm is a novelist and a trained doctor who doesn’t practice medicine anymore. Her books include Next Door, Rebirth and Undertow and has been longlisted for the JCB Prize, Commonwealth Book Prize and Man Asian Literary Prize. She also won the Charles Wallace India Trusts Scholarship for Creative Writing.

Chatterjee will spend the month signing copies of The Water Phoenix in bookshops across Bangalore. Kolkata is the next and final leg of this national book tour.

Microsoft collaborates with MSDE and CBC for capacity building of India’s...