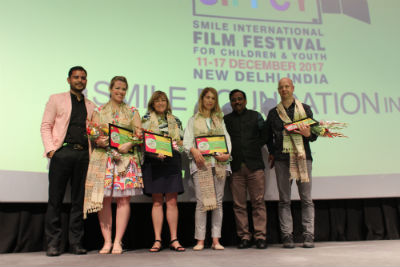 This year, apart from prestigious International juries, SIFFCY also had a young jury board where children have given their inputs in selection of films.

Under Adult Jury Feature Film: for the best children film, The Wind in the Reeds by Nicolas Liguori, Arnaud Demuynck bagged the award. Compartments by Daniella Koffler and Uli Seis won the best youth film. For best story My second Eye by Ahmad Saleh bagged the award and the Wicked Girl by Ayce Kartal won the award for the film with special message.

The Winners under the children jury category were the following. The pocket Man by Ana Chubinidze won the best film award. The Cake Story by Rukshana Tabassium won the Special Mention (For Direction)

Winners under jury category: For best film, Flying Rats by Emiel Sandtke was selected and My Second Eye by Ahmad Saleh won the special Mention (For Direction)

Speaking on the occasion Mr. Santanu Misra, Executive Trustee of Smile Foundation & Chairman – SIFFCY said, “SIFFCY was born out of this belief in the immense potential & power of cinema as a creative & engaging medium to sensitize our younger generation. When we conceptualized it some six years back, we only had a idea and a handful of people with us. But over the years, this idea gained strength as several like minded individuals & institutions joined the movement. Each one of them has made an invaluable contribution in SIFFCY’s journey. As the third edition of SIFFCY witnesses the award ceremony, I feel thankful to all those who believed in our purpose and lent their wholehearted support”.

The jury congratulated all the awards winners and award ceremony ended with a vote of thanks by Jitendra Misra, Festival Director – SIFFCY.

Jitendra Misra, Festival Director – SIFFCY said, “I would like to thank our international guests Ms. Mar-Ien Cover, Ms. Shizuko Suya, Ms. Hideto Hayata, Ms. Seiji Mitsu-Nobo, Ms. Laurie Gordon & Ms. Sigrid Klaus –Man for being here, interacting with our children & making it an unforgettable experience for them. And to Ms. Rima Das for contributing her beautiful film “Village Rockstars” to the festival. I would also like to acknowledge heartfelt appreciation for all our supporters & sponsors, our school partners & festival partners for their participation, encouragement & support. As a festival SIFFCY is still very young and has a long way to go and we are hopeful in the coming years we will take SIFFCY to the next level”.