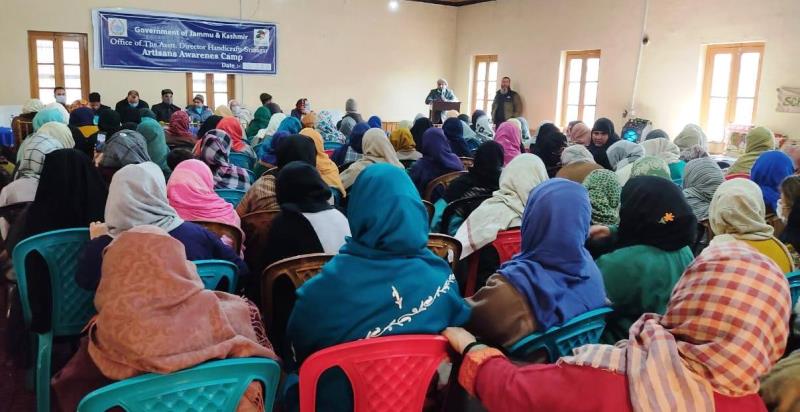 Srinagar: To raise awareness among artisans and weavers regarding various schemes and incentives of the department, the Handicrafts and Handlooms department today conducted an Awareness Camp at Handicrafts Block Office Safakadal, here.

The camp was organised by the department under its Public outreach programme.

The one-day affair was replete with sessions by the designers and master craftsmen from the School of Designs Srinagar on various design and innovations in the handicraft and handloom sector. A motivational and creative touch was given to the camp by Handicraft Training Officers from the district.

The officers of the department, informed the participants about the recently launched credit card schemes incubated at the departmental level and explained to the audience about the concept of innovative and replicative entrepreneurship.

The representatives of several banks also apprised the artisans and weavers about various concepts of entrepreneurship programmes on the occasion that the financial institutes are running in close cooperation with Directorate of Handicrafts and Handlooms Kashmir.

The awareness programme had a motivational, interactive and highly energetic session by the officers of the department who spoke on several avenues associated with the department and available to the artisans/weavers including artisan registration, unit registration, Industrial cooperative formations, vendor and dealer registration at departmental level and as well as facilitation/guidance for registration in e-commerce portals and Udyam.

The audience were also highlighted about the avenues at global level and policies about the exports that the Government has taken in recent year along with the details of potential for Handicraft and Handloom products in international market.

Director Handicrafts and Handlooms Kashmir, Mahmood Ahmad Shah while appreciating the efforts of the field staff, stressed on further hard work to provide the doorstep services to artisan and weavers.

Among others, artisans and weavers from across the district, exporters, national awardee, state awardee, designers and craftsmen from the School of Design attended the programme besides, the officers of the Handicrafts department and other financial institutions were also present.