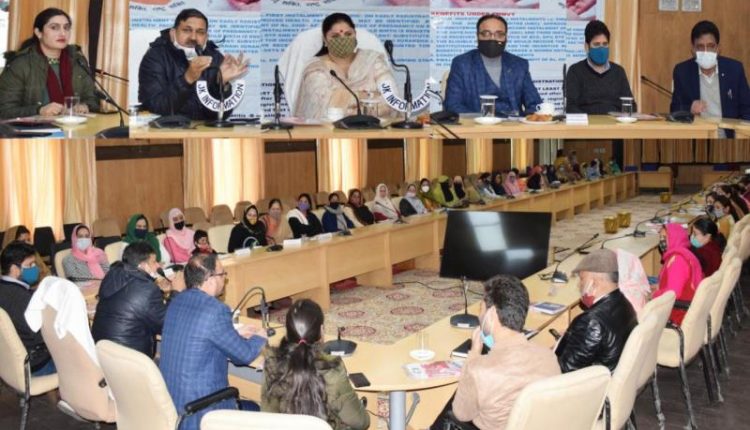 Kishtwar: With an aim to aware the masses about the its schemes, an awareness programme was today organised by ICDS department under the supervision of Programme Officer, Pawan Parihar here at Conference Hall DC office.

The DDC Chairperson, in her address, appreciated the efforts of department for providing adequate nutrition to the AWS. She said that there is need of spreading awareness in far flung areas particularly in Dachhan, Marwah and Warwan where the implementation of various schemes is not up to mark.

The DC underscored the need of organising such awareness programmes on regular intervals by involving PRIs and other elected representatives. In this regard he sought the cooperation of PRIs in effective implementation of various schemes on the ground level.

Earlier, PO, ICDS said that the main objective behind organizing such programmes is to create mass awareness among the people regarding the benefits of the various schemes like Pradhan Mantri Matri Vandana Yojana, Ladli Beti, Nasha Mukht Bharat, Beti BACHAO Beti PADHAO.

He further added that under PMMVY, partial compensation of Rs. 5000/- in three installments of Rs.1000, 2000 and 2000 are provided to all eligible pregnant and lactating mothers who have their pregnancy for the first child in the family.

The awareness regarding the Ladli Beti, Poshan Abhiyan and SAGY was also was imparted to the participants on the occasion.

The DSWO also spoke about the Nasha Mukht Bharat and various measures taken by the department in this regard.